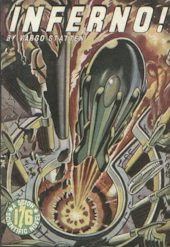 Inferno! was published in 1950 by Scion, Ltd., one of the most successful of several British publishers printing science fiction and fantasy in a digest format in the early to mid-50's. The digest-sized novel never had a comparable heyday in the United States, although a few smaller publishers experimented with the format. Some of those American digests have since become prized collectors' items. Next week's Book of the Week will be the most sought-after of all American digest novels.
Posted by Fantastic Reviews at 11:30 PM