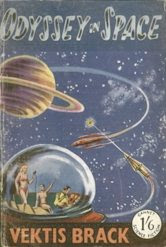 Digest books -- oversized, loosely bound paperback books that look more like digest magazines than typical mass market paperbacks -- were much more popular in England in the 1950's than they ever were in the United States. British publishers commonly used the digest format for their science fiction lines in the 1950's. They were also partial to outrageous pseudonyms for their science fiction writers; other pseudonyms used by Gannet Press included Bengo Mistral and Drax Amper. Even the most prolific British SF writer of the day wrote most of his work under various absurd pen-names, one of which we will see next week.
Posted by Fantastic Reviews at 11:05 PM