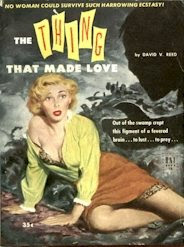 David V. Reed was the pen-name of David Vern (born David Levine, but no relation to the David Levine featured in our August 31, 2006 Magazine of the Week ). He started out as a minor author for the science fiction pulps before going on to a bit more success in comic books, authoring a number of Batman comics. By coincidence, a David V. Reed story appears in one of my personal favorite pulp magazines, also with an outrageous cover, illustrating a story by the most successful pulp writer ever. You will see that magazine, and learn what a "BEM" is, next week.
Posted by Fantastic Reviews at 10:47 PM