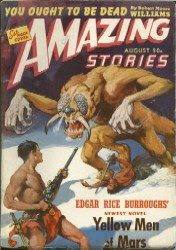 The St. John illustration on the Magazine of the Week is one of my favorite examples of pulp era BEM cover art. Like any specialized community, science fiction fandom has its own peculiar jargon. (You are an SF geek, for example, if you can translate the statement, "I can't decide whether to go check out the filk or just gafiate.") Any serious SF fan will instantly recognize the creature on the cover of the Magazine of the Week as a traditional skiffy BEM, or "bug-eyed monster."
Posted by Fantastic Reviews at 9:48 PM