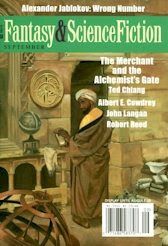 Next week we will finish paying tribute to the winners of the Hugo Awards for fiction with the Best Short Story winner.
Posted by Fantastic Reviews at 10:23 PM