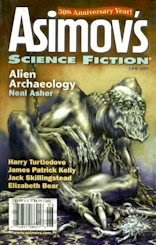 Elizabeth Bear has recently burst onto the science fiction and fantasy scene. Her first story was published in 2003 and her first novel in 2005, but incredibly she will have released fourteen books by the end of this year, all of which have been well received. "Tideline," her first work to be nominated for a Hugo Award but one suspects not the last, is the moving tale of a derelict but intelligent war machine seeking meaning in its final days of consciousness before its batteries die.

Having now covered all of Denvention's Hugo winners for fiction, next week's Book of the Week will be the most collectible item I acquired in the Denvention dealer room.
Posted by Fantastic Reviews at 11:00 PM