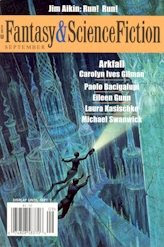 My story recommendation for this week is "Pump Six" by Paolo Bacigalupi, a novelette from the September 2008 issue of Fantasy & Science Fiction. I already praised "Pump Six" in my review of Pump Six and Other Stories, but F&SF reprinting the story gives me an excuse to talk about it again, and this story deserves all the exposure it can get.

"Pump Six" is set in a near-future New York City in obvious decline. Infrastructure is falling apart, sterility is a rampant problem, and many of the children who are born turn out to be bizarre mutations. Yet New Yorkers seem absurdly unconcerned about all this. The main character is trying to keep the city's sewage plant operating, but he can't even convince his coworkers that wearing a smiley-face sticker does not protect them from the effects of polluted water. Bacigalupi eventually gives us a science fictional explanation for why people are behaving so stupidly. "Pump Six" is by far Bacigalupi's funniest story to date, but it is also just as effective a cautionary SF tale as most of his work.

Paolo Bacigalupi has only published eleven stories, but they are as strong a body of work as anyone in the field has produced in the last decade. (His twelfth story, "The Gambler," to appear in the forthcoming collection Fast Forward 2 edited by Lou Anders, is also excellent.) His stories are always beautifully written and usually address issues important to our collective future. Bacigalupi has been nominated for the Hugo Award three times, and I suggest "Pump Six" merits a fourth nomination.
Posted by Fantastic Reviews at 7:15 PM