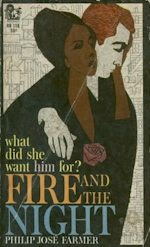 Philip Jose Farmer is best known as a science fiction writer (and is one of my all-time favorites), but Fire and the Night is a mainstream novel about an interracial couple, published in 1962 when such relationships were not widely accepted socially. Fire and the Night features one of my favorite opening lines: "Danny met Mrs. Virgil at the Gates of Hell, where she led him in." Small press Regency Books made its niche in the publishing market printing such controversial books. Not that there was a large enough market for this kind of social criticism to make any money. Regency Books was funded by the publisher's successful lines of soft-core pornography, produced by ridiculously talented authors and editors, some of which I will contemplate exposing you to next week.
Posted by Fantastic Reviews at 5:50 PM