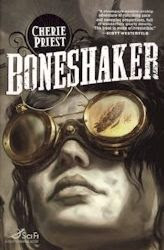 To read the entire review -> Boneshaker
Posted by Fantastic Reviews at 10:44 PM