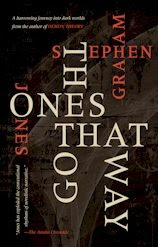 Putting together my Hugo ballot reminded me there are several top-notch stories from 2010 for which I neglected to do a Story Recommendation of the Week. We will begin to rectify that with "Crawlspace" by Stephen Graham Jones, an original story from his 2010 collection The Ones That Got Away, published by Prime Books.

"Crawlspace" is the first-person narrative of Gabriel, a working-class fella whose best friend insists his infant son is telepathic -- the kid cries every time the friend reads a horror novel. It sounds silly enough that Gabriel would dismiss it, except he had some telepathic tendencies himself as a child, and by the way Gabriel has been sleeping with his friend's wife. He really, really does not want to think through the implications.

This is the story of a man who has painted himself into a little corner of hell. His descent into paranoia and unbearable guilt makes for an emotionally harrowing reading experience.

Perhaps best known for his novel Demon Theory, Stephen Graham Jones (not to be confused with anthologist Stephen Jones) combines an off-beat sensibility with a down-home yet hardly simple writing style, somewhat similar to Joe Lansdale. Jones has been a nominee for the International Horror Guild Award and the Shirley Jackson Award, and The Ones That Got Away is currently up for the Stoker Award. Even so, I suspect there are many more readers out there, both genre and mainstream, who would enjoy his work if only they gave it a try.
Posted by Fantastic Reviews at 3:59 PM

Labels: 2010, novelette, Stephen Graham Jones, story recommendations, The Ones That Got Away