Book Review Teaser :: The Habitation of the Blessed by Catherynne M. Valente 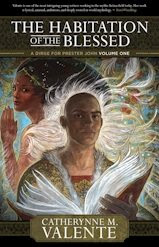 New on Fantastic Reviews is Aaron's review of The Habitation of the Blessed by Catherynne M. Valente.

I am a very bad historian. But I am a very good miserable old man. I sit at the end of the world, close enough to see my shriveled old legs hang over the bony ridge of it. I came so far for gold and light and a story the size of the sky. But I have managed to gather for myself only a basket of ash and a kind of empty sorrow, that the world is not how I wished it to be.

If that passage grabs you the way it did me, then you need to read The Habitation of the Blessed. Because there is a great deal more like that in store for you:

When a book lies unopened it might contain anything in the world, anything imaginable. It therefore, in that pregnant moment before opening, contains everything. Every possibility, both perfect and putrid. Surely such mysteries are the most enticing things You grant us in this mortal mere - the fruit in the garden, too, was like this. Unknown, and therefore infinite. Eve and her mate swallowed eternity, every possible thing, and made the world between them.

Catherynne Valente's use of language is consistently exquisite....

...The Habitation of the Blessed is loosely based on the medieval legend of Prester John, a Christian king once thought to rule a strange land somewhere in the Orient. Valente joins a diverse group of modern authors who have written of Prester John, including Robert Silverberg and Umberto Eco - he has even appeared in Marvel comics.

To read the entire review -> The Habitation of the Blessed
Posted by Fantastic Reviews at 2:46 PM