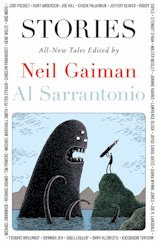 Gaiman coedited Stories, an anthology designed to highlight the storytelling talents of a wide variety of authors from different genres. It includes a number of excellent writers, but none of them could hope to surpass the storytelling skills of Gaiman himself.
Posted by Fantastic Reviews at 10:41 AM

This is Jordan Lapp, a previous WotF winner. We sent you an invite to a google group for WotF 27, but it doesn't look like you've logged in yet. Could you please check your spam filter for an invite? If it's not there, contact me and I'll re-invite you!