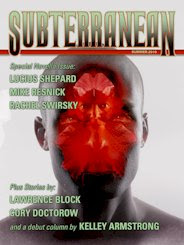 I read several excellent novellas from 2010 -- including strong work from such outstanding authors as Paolo Bacigalupi, Ted Chiang, George R.R. Martin, Paul Park, and Robert Reed -- but "The Lady Who Plucked Red Flowers Beneath the Queen's Window" is my favorite of them all.
Posted by Fantastic Reviews at 11:23 AM