Battle of the Books, Winter 2012, Second Round :: Range of Ghosts by Elizabeth Bear vs. The Pillars of Hercules by David Constantine 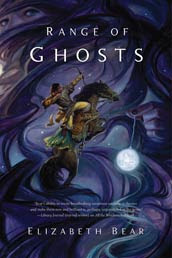 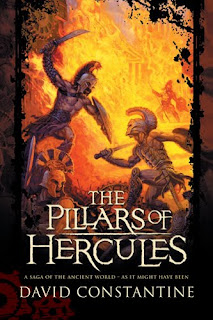 Our final second round match in the Winter 2012 Battle of the Books pits Range of Ghosts by Elizabeth Bear against The Pillars of Hercules by David Constantine. Whichever book I most want to continue reading after 50 pages will grab the last spot in the semifinals.

Range of Ghosts: Tor hardcover, March 2012, 334 pages. Range of Ghosts got here by defeating Jack of Ravens by Mark Chadbourn in the first round.

Range of Ghosts is epic fantasy in a land very similar to the ancient Mongol Empire. Our hero Temur was gravely wounded fighting for his brother in a war of succession against their uncle. In the first 25 pages, we saw Temur head into exile along with other survivors of the fighting, but as a potential rival for the throne, his uncle still wants Temur dead and has called on a powerful sorcerer to eliminate him. In the second 25 pages, we see Temur befriend some of his fellow travelers, as dark forces close in on him. Meanwhile, in a city not yet affected by the fighting, we meet a woman named Samarkar, who has willingly undergone surgery leaving her barren, so that she may train to be a sorcerer.

The Pillars of Hercules: Night Shade trade paperback, March 2012, 387 pages, cover art by Daren Bader. The Pillars of Hercules reached the second round with a first-round win over Andy Gavin's The Darkening Dream. I suggested at the time that David Constantine is a pseudonym of science fiction author David J. Williams, but so far no one has come forward to confirm or deny this.

The Pillars of Hercules is fantasy/alternate history set around 330 B.C. A huge conflict is brewing, one that never happened in our world, between Alexander the Great and a powerful Athenian empire. Both sides have access to magic and advanced technology not available in our timeline. In the first 25 pages, Alexander defeated a vast Athenian fleet to seize control of Egypt, while our mercenary heroes Matthias and Lugorix managed to escape in a turbine-powered boat with a mysterious Persian princess. In the next 25 pages, the refugees arrive in Athens, while Alexander makes a pilgrimage across the Egyptian desert to see an oracle. We do not get to see this meeting onstage, suggesting Constantine is holding back something critical that Alexander has learned.

The Battle: Posting results in the first round, the challenge was not to sound too negative about books I disliked, since after only 25 pages I hadn't really given them a fair chance. In the second round, I find the challenge is to explain dropping out a book after 50 pages even though it's really good, just because the book it's up against happens to be really, really good.

The first 50 pages of The Pillars of Hercules are really good. This alternate version of ancient Greece and Persia is most interesting, and I love the descriptions of ancient Greek cities and navies even more impressive than the ones in our history. (Although you have to be careful picking through what's historically accurate and what's augmented -- reading of Athenian merchants unloading ships with cranes I assumed this was an anachronism, but further research tells me they actually used cranes in ancient Greece.) A massive conflict is brewing, driven by Alexander's ambitions. It feels like the sort of good-versus-evil battle familiar in epic fantasy, but was Alexander really evil? Although I haven't gotten terribly attached to any of the characters so far, the banter between Matthias and Lugorix is amusing.

The first 50 pages of Range of Ghosts are amazing. I read through every passage twice, once as a reader, marveling in the story, and imagery and language; once as an aspiring writer, trying to figure out how I could write like that (short answer: ain't gonna happen).

To start with, Bear shows a marvelous flair for introducing the fantastic elements of her story. Here, for instance, is the sorcerer al-Sepehr with his book of dark spells:


A book. Or what could have been the ghost of a book, perhaps -- its covers translucent gray, marked with letters white as bone; its binding rings silver; and every transparent page within etched with the gorgeous serpentine cursive letters and diamond-shaped accents of the dialect of ancient Erem.

The glass covers chimed softly as al-Sepehr drew on a kidskin glove and opened them with infinite care. Some of the page edges were chipped, and he was too well acquainted with the illness that followed when he let this dire old thing taste his blood. One by one, he turned the crystal leaves, watching as transparent letters cut in transparent pages caught the sunlight.

Every word twisted in his head and made his eyes ache and burn. He found the page he wanted and settled down to study the spell inscribed therein.

To raise the enemy's dead and bind them to your bidding.

Temur will have to faced these raised dead, including the ghost of his own brother.

All the non-fantastic elements of Range of Ghosts are just as good. The scenery and different cultures in the story are fascinating, with a very different flavor than most epic fantasy. Samarkar is an intriguing character, a woman who does not seem power-hungry, yet she gave up a position in high society for power. Temur is an extremely likeable young man -- he gets a love scene that is very beautifully written, but also downright hot, because we are so happy to see something nice happen to him. But the scene ends on a bittersweet note, as one of the moons in the night sky flares out, indicating that another of Temur's relatives has died.

Where is all this headed? Will Temur decide to try to reclaim the throne from his uncle? Will he find an ally in Samarkar? Let me say for the record: I don't care. Wherever Elizabeth Bear decides to take this story, I want to go there with her.

Range of Ghosts advances to the semifinals, to face And Blue Skies from Pain by Stina Leicht.

To see the whole bracket, click here.
Posted by Fantastic Reviews at 5:42 PM