Battle of the Books, Winter 2012, Second Round :: Thief's Covenant by Ari Marmell vs. And Blue Skies from Pain by Stina Leicht 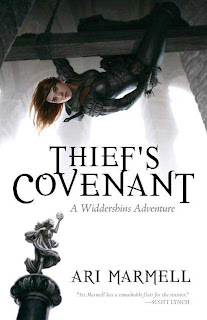 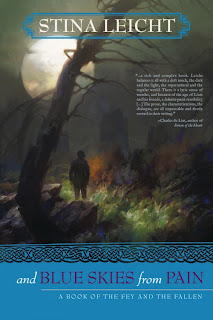 We continue the second round with Thief's Covenant by Ari Marmell against And Blue Skies from Pain by Stina Leicht. The book I most want to continue reading after 50 pages will advance to the semifinals.

Thief's Covenant: Pyr hardcover, February 2012, 272 pages, cover art by Jason Chan. A young adult fantasy, Thief's Covenant reached the second round with a hard-fought first-round victory over Mark Hodder's Expedition to the Mountains of the Moon.

The story follows Adrienne Satti, aka master thief Widdershins. The first 25 pages were mostly flashbacks to when Adrienne was orphaned as a young girl, and when she was the only survivor of a gruesome attack on the upper class of her city of Davillon. In the second 25 pages, we see her in the guise of Widdershins, a medieval cat-burglar, as she steals a tidy sum from a wealthy gentleman. She is assisted by Olgun, one of the 147 gods that intervene in this world, who for some reason is quite attached to her.

This is the sequel to Of Blood and Honey, in which a supernatural conflict involving the Catholic Church plays out against the background of the turmoil in Northern Ireland in the 1970's. Catholic priest-warriors have been battling dangerous fallen angels for generations. But one of the priests, Father Murray, believes they don't need to be enemies of one type of supernatural creature, the shapeshifting Fianna. At the beginning of the second book, Father Murray has persuaded the Church to agree to a truce. A key condition is that our protagonist Liam, half-mortal son of one of the Fianna, has agreed to be tested to help the Catholic warrior-priests determine if they really can co-exist peacefully with the Fianna. The truce is fragile.

The Battle: I'm enjoying both of these books very much.

In Thief's Covenant, Adrienne is a good, spunky protagonist, and there's a nice mystery to how the different phases of her life fit together. I am intrigued by what the 147 different gods in this world are up to. Marmell is also exploring the implications of social stratification in Davillon, which is an interesting theme for a YA book.

Because of all these strengths, I loved the first 25 pages of Thief's Covenant. However, the second 25 pages, which consisted mostly of Adrienne as Widdershins pulling off a heist, didn't work quite as well for me. The problem is with the god Olgun hanging over her shoulder. Olgun gives Widdershins someone to talk to, like the daemon Pantalaimon in Philip Pullman's The Golden Compass. But I didn't find the humorous banter between Widdershins and Olgun terribly funny, although that may be because it's aimed at younger readers. More importantly, Olgun's constant presence detracts from the dramatic tension, because we know if Widdershins gets in trouble, Olgun can get her out. Marmell hasn't told us what limitations there are to Olgun's powers, but hopefully he will soon, or perhaps he will introduce an antagonist god to make matters more difficult.

The opening scenes of And Blue Skies from Pain deal with the nuts-and-bolts of implementing a cease-fire between the Church and the Fianna, which I presume became possible through the events of the first book in the series. I love that, having arrived at a truce, Leicht doesn't hand-wave away the details of making the truce last. Instead, she dives into the politics of the situation, and manages to make them intriguing and believable.

Many of the preist-warriors are against the truce, either because they sincerely believe the Fianna are evil, or because they can't bear to accept that they have been killing innocents all these years. (It's hinted that there are similar misgivings on the other side of the cease-fire, but we haven't yet seen much of the Fianna other than Liam in the first 50 pages.) The priest "Inquisitor" doing the testing on Liam -- with an armed guard always at hand -- repeatedly refers to Liam as "it," unwilling to regard him as a person with a soul.

Throughout the examination, Liam is nervous, almost panicky, imagining that he has been betrayed and is about to be tortured. We soon realize the problem is not that Liam is prickly, but that he has grown up in a place where suspicion and distrust are learned from an early age. The similarities and differences between this supernatural conflict and the more familiar disputes in Northern Ireland are fascinating:

"Are you mental?" Can't defend myself, Liam thought. Can't shape-shift. Trapped. Was stupid to have come here. A powerful need to run tightened his muscles. The reasonable part of himself knew he was over-reacting. Why was he so terrified of an Inquisitor and not the spotty boy with the Kalishnikov? Then it came to him. Loyalist hatred was mundane. Terrible as it was, he understood it. Loyalists hated anyone who wasn't a Loyalist. Every Irish Catholic knew that. He'd grown up with such things. On the other hand, murderous Inquisitors, demons, and Fey were aspects of a strange world he knew little about -- a world with rules he didn't know, a world he'd been dragged into against his will.

There follows some delicious dialogue where Father Murray intimidates the Inquisitor into being less combative, through a combination of reasoning and rank. The first 50 pages then end with a tense conversation between Father Murray and his superior Bishop Avery, discussing how to make peace palatable to others in the Church. It seems likely that the right solution to this conflict may not be the feasible solution, which I expect will create a moral dilemma for both Father Murray and Liam.

Based on the first 50 pages, I would recommend both of these books. But if I could only continue reading one of them, I know which I would choose.

THE WINNER: AND BLUE SKIES FROM PAIN by Stina Leicht

And Blue Skies from Pain moves into the semifinals, to battle either Range of Ghosts by Elizabeth Bear or The Pillars of Hercules by David Constantine.

To see the whole bracket, click here.
Posted by Fantastic Reviews at 12:34 PM