Battle of the Books, Bracket Five, First Round :: City of the Fallen Sky by Tim Pratt vs. A Guile of Dragons by James Enge 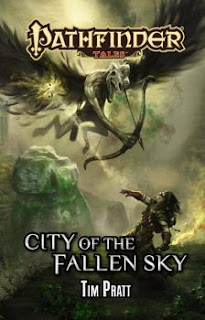 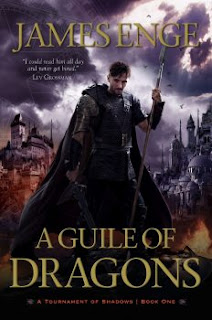 The penultimate match in the first round of Bracket Five of the Fantastic Reviews Battle of the Books pits City of the Fallen Sky by Tim Pratt against A Guile of Dragons by James Enge. The winner will be the book I (Aaron) most want to continue reading after 25 pages.

City of the Fallen Sky: Paizo paperback, June 2012, 353 pages, cover art by J.P. Targete. Tim Pratt is the author of The Strange Adventures of Rangergirl and Briarpatch, as well as two collections, three media tie-ins, seven urban fantasies as by T.A. Pratt, and one novel under the name T. Aaron Payton. Pratt won a Hugo Award for his story "Impossible Dreams" and has been nominated for the Nebula and World Fantasy Awards, among many other honors.

City of the Fallen Sky is a Pathfinder role-playing game tie-in. (Another Pathfinder book, Nightglass by Liane Merciel, has already advanced to the second round in this bracket.) Our protagonist is Alaeron, an unscrupulous scholar in possession of magical artifacts he has stolen from Technic League. In the opening scene of City of the Fallen Sky, Alaeron uses one of those artifacts to rescue a beautiful woman named Jaya from two menacing thugs. But Alaeron soon will be menaced himself, both by an agent of the Technic League and the rich employer of the two thugs, and he may need Jaya to come to his rescue.

A Guile of Dragons: Pyr trade paperback, August 2012, 264 pages, cover art by Steve Stone. James Enge is the author of the Morlock Ambrosius trilogy, beginning with Blood of Ambrose, which was nominated for the World Fantasy Award. Enge also teaches at Bowling Green, under a funny name.

A Guile of Dragons is the first in a prequel series, showing the early days of Enge's character Morlock Ambrosius. In the opening chapters, Nimue Viviana discovers she is pregnant by her lover Merlin. Fearing that Merlin will cast her aside, Nimue is persuaded by Earno Dragonkiller to betray Merlin. Earno transports Nimue across the Sea of Worlds, and she and her unborn child are transformed by the voyage.

The Battle: This battle matches up two excellent fantasists. Enge is going back to the origins of his signature universe. Pratt is working in the Pathfinder RPG universe, and the two previous Pathfinder books in the Battle of the Books were both impressive.

The opening of City of the Fallen Sky is also nicely written, but it lacks the engaging characterization of the other Pathfinder books I've sampled. Through 25 pages, I don't have a good sense of the character Alaeron. Hopefully as the book proceeds, he will develop enough personality to carry a novel, but the Battle of the Books can be unforgiving of characters who need time to grow on you.

A Guile of Dragons opens with a very clever short chapter explaining how our hero Ambrosius earned the enmity of the universe's competing Two Powers: "They both hated Ambrosius. He would suffer for inspiring them to agree on anything." From there, we flash back to before his birth, when his mother Nimue faced some agonizing decisions. Even if readers believe she was wrong to betray Merlin, her reasons are understandable, and we can still sympathize with her. Although I have not read Enge's previous books, the opening section of A Guile of Dragons is most engaging, definitely leaving me wanting to read more.

THE WINNER: A Guile of Dragons by James Enge

A Guile of Dragons advances to the second round, to meet either The Testament of Jessie Lamb by Jane Rogers or This Case Is Gonna Kill Me by Phillipa Bornikova.