Battle of the Books, Bracket Five, First Round :: The Testament of Jessie Lamb by Jane Rogers vs. This Case Is Gonna Kill Me by Phillipa Bornikova 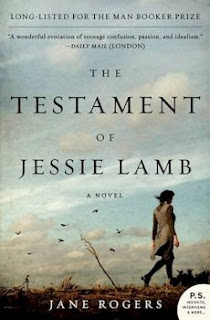 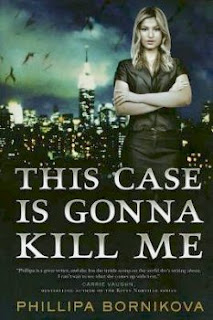 The final first round match of Bracket Five of the Battle of the Books features The Testament of Jessie Lamb by Jane Rogers going against This Case Is Gonna Kill Me by Phillipa Bornikova (aka Melinda M. Snodgrass). The winner will be the book I (Aaron) most want to continue reading after 25 pages.

The Testament of Jessie Lamb: Harper Perennial trade paperback, May 2012, 240 pages, cover photo by Clayton Bastiani. Jane Rogers is the author of eight generally well-received mainstream novels. The Testament of Jessie Lamb is her first try at science fiction. It was originally published in England in 2011 to a very favorable reception, including being longlisted for the Man Booker Prize and winning the Arthur C. Clarke Award.

The Testament of Jessie Lamb is set in a near-future world in which it has become impossible for women to have children. (Please don't say Rogers borrowed the idea from The Children of Men by P.D. James, because the premise was used well before that, notably by Brian Aldiss in Greybeard.) Teenager Jessie Lamb writes this memoir from the locked room in which she has been imprisoned, apparently by her father. She recounts the general panic and unrest when Maternal Death Syndrome, or MDS, first spread through society. MDS is a virus created by bio-terrorists, which has infested everyone. Triggered by pregnancy, it is fatal within a few days to any woman who becomes pregnant. But the threat of death is not sufficient to keep the boys and girls in Jessie's circle of friends from desiring each other.

This Case Is Gonna Kill Me: Tor trade paperback, September 2012, 318 pages, cover photo by Veer & Getty Images. Phillipa Bornikova is the urban fantasy alter ego of Melinda M. Snodgrass, the author of seven original SF/F novels, as well as a Star Trek tie-in and extensive work in George R.R. Martin's Wild Cards universe. Snodgrass also wrote several romances in the 80's under the name Melinda McKenzie. Her background as a fellow lawyer is easy to spot in much of her work, notably her Circuit/Circuit Breaker/Final Circuit lawyers-in-space trilogy, all of which were nominated for the Prometheus Award. Her most recent books under the Snodgrass name were The Edge of Reason (2008) and The Edge of Ruin (2010). Snodgrass also wrote several episodes of Star Trek: The Next Generation and was story editor for the show's second and third seasons.

This Case Is Gonna Kill Me is urban fantasy slash legal thriller. Our protagonist Linnet Ellery, fresh out of Yale Law School, has just started work at a prestigious New York "White-Fang" law firm. In this society, vampires hold most positions of authority. In particular, all of the senior partners at the firm are vampires, and the male associates are vying to be made partners and also made vampires. But in this world, vampires only bite men; so as a woman, even if Linnet manages to become a partner, it will only be for one mortal lifetime. In the first 25 pages, Linnet is shunned by her fellow new associates and stuck in a drab assignment, assisting with a stale probate case. She gradually comes to realize that she is a pawn in a political contest between two of the senior partners.

The Battle: I am happy to say this is a battle between two excellent women authors who have created two strong, albeit inexperienced, female protagonists.

I like the opening of The Testament of Jessie Lamb very much. The prologue with Jessie Lamb in chains is a solid hook, immediately letting the reader know the gravity of her situation, which is very far from our experience and yet at the same time rather familiar, a father unwilling to let his little girl grow up. I find it quite believable that Jessie and her friends are terrified by MDS, yet still infatuated with each other, and also secretly thrilled by the whole thing:

But during that evening, before I started feeling ill, when we were all madly dancing and making the world spin around us, I had this fantastic sense of freedom. I thought I could be free of my Mum and Dad and their petty squabbles. I could soar. No one could say a thing to me, especially not anyone older than me. Because it was them who had messed things up.

The beginning of This Case Is Gonna Kill Me is also nicely done, but I'm sorry to say that, as much as I admire Melinda Snodgrass as a writer, I'm not her ideal reader for this one. I often have a hard time engaging with urban fantasies, and this one is a particularly hard sell for me because the opening section strongly emphasizes the legal side of the story rather than the urban fantasy. Through 25 pages, nothing fantastic has happened at all. I mean, Linnet is told all the senior partners at her firm are vampires, but hell, they told me the same thing when I started work as a lawyer. So far, the thrust of the story is big law firm politics, which I've experienced far too much of in the past twenty years (albeit not in a snooty Manhattan firm) to enjoy.

I feel badly for not giving Snodgrass more of a fair shake here, but then there is little shame in dropping a battle to a Clarke Award-winning novel with a very strong opening.

The Testament of Jessie Lamb moves into the second round, where it will face A Guile of Dragons by James Enge.