Battle of the 2012 Books, Bracket Eight, First Round :: Beyond Here Lies Nothing by Gary McMahon vs. A Red Sun Also Rises by Mark Hodder 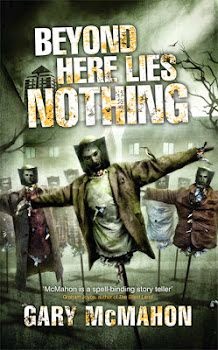 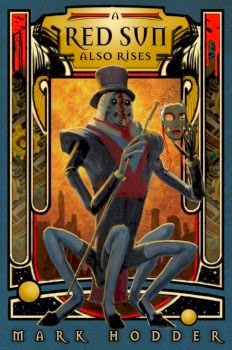 We return to the Fantastic Reviews Battle of the Books, after a brief interlude to argue about puppies. The fourth match in the first round of Bracket Eight of the Battle of the 2012 Books features Beyond Here Lies Nothing by Gary McMahon versus A Red Sun Also Rises by Mark Hodder. The winner will be the book I (Aaron) most want to continue reading after 25 pages.

Beyond Here Lies Nothing: Solaris, August 2012, 352 pages, cover art by Vincent Chong. Gary McMahon is the author of nine novels, a half-dozen collections and several chapbooks, mostly horror. Beyond Here Lies Nothing is billed as the third book in the Concrete Grove Trilogy, following The Concrete Grove and Silent Voices. But I've heard that each novel in the trilogy features different main characters and a story that stands alone. After 25 pages, I certainly don't feel like I've stepped into the middle of the story. The novel begins with a page from the diary of a child terrified of a bogeyman that goes "clikcety clikcety." Then we meet Marc Price, who has come to Concrete Grove for the funeral of a friend of his late uncle's, whom Marc had recently gotten to know while researching a news story or book. He accompanies the brother of the deceased to a nearby tavern, where he meets a provocative woman named Abby, who snaps at him rather rudely, yet seems determined to take him home with her.

A Red Sun Also Rises: Pyr, December 2012, 273 pages, cover art by Lee Moyer. Mark Hodder is best known as the author of the Burton & Swinburne alternate history series, the first volume of which won the Philip K. Dick Award. A Red Sun Also Rises is a stand-alone, unrelated to that series as far as I can tell. The protagonist of A Red Sun Also Rises is Aiden Fleischer, a 19th Century English priest. In the opening section of the book, Fleischer comes across as pedantic and judgmental despite being filled with self-doubt. He becomes infatuated with a new family's beautiful daughter, which potential impropriety the family promptly seizes on to blackmail him. Rather than confront the family, Fleisher flees to London, just as Jack the Ripper's killing spree begins. Through 25 pages, the alien creature on the cover of the book has made no appearance.

The Battle: Here is an interesting Battle. Both these books are nicely written, both feature obviously flawed main characters, and neither book has gotten to the main storyline in the first 25 pages——nothing science fictional or supernatural has yet occurred in either one. And yet, one book has pulled me into the story much more firmly. Let's see if I can articulate why.

First, while I have no particular complaints about the writing in A Red Sun Also Rises, neither has it especially caught my eye, while Beyond Here Lies Nothing has some very intriguing descriptions of its Concrete Grove setting:

As he drove, he was struck by the way things never changed around here. It was like a film set that had not been taken down when the production company moved on, and people had moved in to set up home inside the two-dimensional backdrop. There was a sense of impermanence, yet also the belief that everything would remain as it was now, as it had been since the estate was built.

Second, both authors include a prologue to let us know that fantastic events are coming, but McMahon's works better for me. A Red Sun Also Rises begins with Mark Hodder claiming the manuscript to follow was retrieved from a sunken sea vessel. I appreciate the nod to proto-science fiction novels, where the authors always felt compelled to insist, this really happened. But it didn't draw me in like the single page of a child's diary that opens Beyond Here Lies Nothing:

I think somebody hates us. he is in the house all the time but we cant see him. he makes noise when nobody else is here. he wants to hurt us. we hide under the bed when mummy and daddy are in the pub.

To me, that is chilling stuff.

Finally, while both books' protagonists are flawed, Hodder has yet to give his main character any likeable qualities at all (one hopes they're going to start to develop fairly soon), while McMahon's cynical loner protagonist is at least interesting. I want to know more about him, and about this odd place called Concrete Grove.

THE WINNER: Beyond Here Lies Nothing by Gary McMahon

Beyond Here Lies Nothing advances to the second round to face Osama by Lavie Tidhar.

Posted by Fantastic Reviews at 11:58 PM