Battle of the 2013 Books, Bracket One, First Round :: Mist by Susan Krinard vs. Shadow People by James Swain 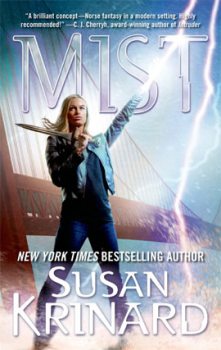 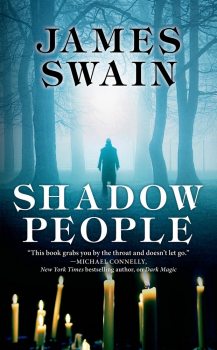 We continue the first round of Bracket One of the Battle of the 2013 Books. The bottom half of the draw begins with Mist by Susan Krinard against Shadow People by James Swain. The winner will be the book I (Jackie) most want to continue reading after 25 pages.

Mist:  July 2013; 382 pages; cover illustration by Fred Gambino. Susan Krinard had written paranormal romance and fantasy since 1993. She has written three books for her "Midgard" series: book one, Mist; a prequel Freeze Warning; and book two in the series, Black Ice. She has also published books with Harlequin.

Mist begins with a prologue. The setting is 1942 Norway, during World War II. Mist is a Valkyrie, a female warrior of Odin from Norse mythology. She is with two other sister Valkyrie: Horja and Bryn.

The All-father Odin exiled the Valkyrie from Valhalla and forbade the use of their "treasures" (weapons) in battle until the Aesir return. Mist has rebelled and encouraged her sisters to join her in wielding their treasures. Horja holds Thor's unbreakable staff; Byrn uses the magic feathered cloak, which gives her the ability of flight by changing into a gyrfalcon; and Mist wields Gungnir — Odin's spear that never misses. All are activated by chanting runes. These three Valkyrie have lost contact with the other nine Valkyrie since the Last Battle, not knowing if they are alive or dead.

The three Valkyrie are helping a group of people in the Norwegian Resistance escape, through the snow, from Nazi soldiers. Unfortunately, the soldiers find them and kill most everyone, except two girls. During her fight as a gyrfalcon, Bryn's cloak loses its magic, and she falls to the ground. She dies after impact. Mist goes her separate way from Horja who will help the two survivors cross the border into freedom.

Mist feels responsible and guilty for the deaths since she persuaded her sisters to use the forbidden weapons.

Moving into the future, Mist continues in present-day San Francisco. Mist is sword playing with her boyfriend Eric. When they part, Mist finds herself drawn to a city park. There she is confronted by a chill of fog, "slithering and hissing like the serpent Nidhogg…." Out of the fog appears the frost-giant Hrimgrimir. Mist still controls some magic. She finds a stick, and with blood and runes, changes it into a sword. She injures the giant and he retreats. She goes after him and encounters a homeless person who seems to be something different.

Shadow People:  June 2013; 351 pages; jacket art by Trevillion Images; Jacket design by Base Art Co. Shadow People is the second novel in the Peter Warlock series that began with Dark Magic. Swain has also published crime and mystery books in the Jack Carpenter series and the Tony Valentine series.

The dark entities you might see out of the corner of your eye are called Shadow People. They are between this world and the world of spirit. They are "evil apparitions that attach themselves to humans, and refuse to let go."

Peter Warlock, magician and psychic, is conducting a séance with friends — including a psychic reader, an aspiring witch, and a blind fortune teller — in a New York apartment. This weekly event usually goes well, and sometimes crimes are solved or stopped because of Peter's visions. Before starting the séance, Peter gets a glimpse of a shadow person. Before pondering more on this entity, Peter transports into the future to the basement of a serial killer who's about to go snatch his next victim.

Usually, when Peter transports to a location, whether in the past, present, or future, the people he sees cannot see him. However, this evil man, whom Peter calls "Dr. Death," can see him, which means that Dr. Death is in cahoots with the devil. Dr. Death tries to run over Peter with his car and then attempts to shoot him. Peter can die in this future place, and while he faces the gun, he begs his spirit helpers to snap him from this place. They usually respond immediately, except for this time. He barely makes it back to the séance.

Peter dictates his experience at the séance. Peter plans to contact his FBI friend Agent Garrison with the details, hoping the FBI can track down Dr. Death and end his future killing spree.

Peter leaves with Homer, the blind fortune teller, and walks him to the bus stop. Homer tells Peter what he knows about shadow people and how they can "destroy your life." When Homer had to deal with the shadow people in the past, he and others wore five-pointed star talismans against the evil.

Herbie, Peter's limo chauffer, drives Peter home. On the way, he tells Peter that a cab driver he knows saw Homer disappear under the arch in Washington Square Park.

Peter, standing outside his brownstone, calls FBI Agent Garrison. During the call, Peter's girlfriend Liza is trying to call him. He ignores it, until she tries again, which means it's important. Then his shoe flies out from an upper window. Peter rushes in to see his brownstone in shambles. Many of his magician's tools and tricks are broken and trashed. He runs upstairs to find a shadow person in the bedroom and Liza hiding in the closet. Peter opens a wall safe to retrieve a necklace of his mom’s — a five-pointed star — and gives it to Liza. The shadow person closes in on the two. Peter tries to protect Liza by pushing her behind him. He has a plan.

Mist takes us into two time periods: WWII and then the present day.

In the past, Mist seems broken and frustrated to not be able to battle the Nazis as a true powerful Valkyrie, using the "treasures" that should work and defeat the enemy. Innocent people die around Mist for centuries, and she is helpless to do what she was made to do. But when was the Last Battle? How long have they been wandering the earth?

Next we jump to present day where Mist is in a sword battle with her boyfriend Eric. She considers letting him win, "male pride being such a fragile thing….," but doesn't because Mist has the Valkyrie instinct to win battles.

When Mist confronts the frost-giant Hrimgrimir coming out of the fog, it seems surprising that she can use powerful magic to force the creature to retreat, yet she and her Valkyrie buddies couldn't do much against the Nazis. I wonder how strong Mist's magic really is, and why didn't she and fellow companions use it back in 1942?

Shadow People follows a normal time line until Peter enters a trance. His soul or astral body moves to these places and can be killed in these places. I'm curious to know how and why.

At first, Peter's last name, "Warlock" seemed over the top and typical for someone who conducts séances and performs magic. However, the story propelled me forward right away, and my curiosity continues to be tweaked. Homer, the blind psychic, interests me. I want to know more about him, too.

Even though Shadow People is the second book in the series, I followed along without feeling backstory details were necessary.

Both books have great compelling hooks at the end of the 25 pages that made me want to read more. Both included happenings in different times, jumping from past to future or present to future. I liked the characters within each story. This is a tough choice.

I think my reading experience of Mist would have been enhanced had I been more knowledgeable of Norse mythology and the stories of the Valkyrie and Odin. The poem helped a bit, but I wanted more background.

On the other hand, considering Shadow People, I’m not a big reader of occult fantasy, especially if it has to do with serial killers of women.

Shadow People advances to the second round to face the winner of the battle between Burning Paradise by Robert Charles Wilson and Trinity Rising by Elspeth Cooper.

To see the whole bracket, click here.
Posted by Fantastic Reviews at 9:48 AM