"Solder and Seam" by Maria Dahvana Headley :: Aaron's Story Recommendation of the Week 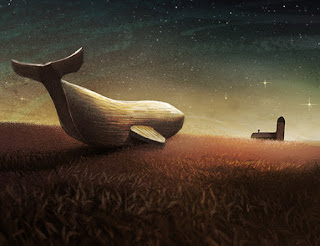 "No one ever thought of themselves that way, but statistically, it had to be true that some people were exactly what they thought they weren’t."

My Story Recommendation of the Week is for "Solder and Seam" by Maria Dahvana Headley, a short story from the October 2015 issue of Lightspeed Magazine.

Set in a mostly depopulated far-future Midwest, "Solder and Seam" is the story of a soldier turned farmer, who one day decides to build a whale out of wood in the middle of the prairie.

Our protagonist is building a white whale, at once putting us in mind of Noah and Captain Ahab. But we also know he is emotionally scarred from fighting in a revolution on another world. And we know he has hidden his true identity for many years:


The afternoon he painted the whale, there was a storm. It wasn’t raining where he was. It’d stopped raining on the dirt. Now storms took place above the ground and if you were watching, you could see rain disappearing fifty feet above you, sputtering out like it had hit some invisible drought. He watched the storm roll across the sky like his first wife had rolled across his bed and out the other side. He’d done that one wrong. He probably could have told her who he was, but he had a new face, and why take responsibility for his old soul when he looked like someone who hadn’t been born into it?

This is an evocative, beautifully-written story. Even if you've guessed the protagonist's identity, the way it is revealed is memorably done.

Maria Dahvana Headley is the author of the YA fantasy Magonia, the historical vampire novel Queen of Kings, and the memoir The Year of Yes. She has previously been nominated for the Nebula Award, and "Solder and Seam" is written at an award-caliber level.
Posted by Fantastic Reviews at 2:22 PM