Battle of the 2013 Books, Bracket One, Second Round :: Electricity & Other Dreams by Micah Dean Hicks vs. Fiend by Peter Stenson 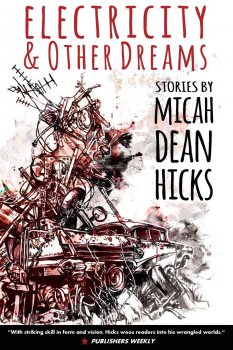 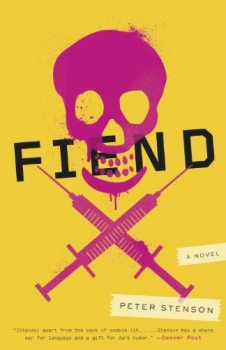 We begin the second round of Bracket One of the Battle of the 2013 Books with Electricity & Other Dreams by Micah Dean Hicks going against Fiend by Peter Stenson. In the second round, the books are judged after reading a total of 50 pages. The winner will be the book I (Jackie) most want to continue reading after 50 pages.

Electricity & Other Dreams:   New American Press; May 2013 (the collection of 26 stories were published individually from 2010 to 2012); 224 pages; cover design and interior art by Liz Green. Micah Dean Hicks writes "magical realism, modern fairy tales, and other kinds of magical stories." Electricity & Other Dreams got past The Returned by Jason Mott to get into the second round.

My 50 pages of reading included a total of 6 short stories plus one page of another. For the first round of Battle of the Books, I read the short stories "The Alligator Guides", "Ladybaby's Chickens" and "Dog Summer". You can read my descriptions of them here.

For this second round match, I read 25 additional pages, which are the three short stories described below, plus one page of another short story titled "How the Weaver's Wife Killed the Motorcycle Man." No "spoiler alert" endings are revealed.

"The Time of the Wolf" -- Jackson, on a break from work, wants to buy a beautiful jinn-stone ring as a gift for his son. The shopkeeper Abdul Carin of Contractor Town warns him that it is a cursed stone and its evil side effect – death – follows it. Jackson wants it all the more and offers an exorbitant amount of money. Abdul says the jinn stone has power and can literally stop bullets, but the phoenix rising from the fire will make sure that Jackson will die. Jackson thinks that to be hogwash but puts on the ring and can't get himself to take it off. He decides to get his son a different gift. Jackson begins to feel energetic and takes on lots of jobs. But that displaces many other workers, who then try to kill Jackson. Bullets seem to bounce off Jackson. Soon something stranger begins to happen to Jackson.

"When the Plumber Drank the Ghosts" -- A new owner of a haunted house (previously a bar) had hired a priest, an exterminator, and even a weatherman to exorcise the ghosts occupying this abode. Next, Henry the plumber was hired. When the plumber first entered the bar, he saw about 30 ghosts reading newspapers and drinking coffee. The stench of alcohol was strong. The ghosts would sometimes interact with each other and occasionally look at the plumber. Henry discovered that the ghosts were confused as to what the problem was. They had happily occupied the bar with no one complaining. But now, the new owner wanted the ghosts out. Henry decided to first fix the atrocious plumbing in the building. The ghosts followed him around and asked him questions, which he didn't answer. At the end of the day, Henry opened a can of beer and a weird thing happened.

"Dessa and the Can Hermit" -- Dessa collects cans in ditches on the side of the road. She finds a mound of beer cans. She picks up the first can to add it to her sack and finds a finger inside. In another can, there's a nose, and so forth until, before her, is "a shriveled old man with worn out clothes." The old man, the can hermit, asks Dessa to give him back his cans because they make up his home. Dessa responds, "Go live in a hole." Dessa leaves, and the old man crawls after her. When the old man sees that Dessa lives in a trailer, he says that she should understand how he feels because Dessa also lives in a can. Dessa tells the old man that he can have the cans back if he does everything she tells him to do. He agrees. But that's when the evil can collector man, to whom Dessa sells her cans, shows up.

Fiend:   Crown Publishers; 2013; 295 pages; cover design by Christopher Brand. Stenson has published stories and essays in various magazines, newspapers, and journals. He was nominated for a Pushcart Prize: Best of the Small Publishers series.  Fiend is Stenson's first published novel. Fiend defeated Never by K. D. McEntire to get into the second round.

Fiend begins with first-person narrator Chase Daniels looking out a window of the house. He watches a cute little girl creep up to a Rottweiler and rip out its throat. Chase thinks that his high from smoking "scante" has warped his vision. Chase and his friend named Typewriter John are high and getting higher.

Typewriter and Chase are shocked when the Rottweiler-killer girl breaks into the house with the intention of killing, accompanied by little girl giggles. Typewriter picks up a typewriter and kills the zombie girl.

Chase decides to go home to his apartment building, hoping this weird "trip" will end soon – after first setting fire to the room to destroy the murder scene. As Chase and Typewriter travel, they notice that no one is in the streets, no cars drive by. Stores are empty. The first thing Chase sees at his apartment building are cats eating another tenant named Rebecca. Next the guys try Svetlana's apartment. A computer is on and some guy on the computer messages that they should kill Svetlana. Confused, Chase and Typewriter look around — and there is a giggling Svetlana-the-zombie ready to pounce on them.

Svetlana attacks Typewriter, clawing and scratching. Chase picks up a sharp shard and stabs her in the neck so many times that her head rolls off. Chase, continuing with his in-head chatter, wonders if the scratches will infect Typewriter.

It's dusk when they run outside to the Civic and notice that the streets are filling with zombies. They high-tail it out of there! Chase demands Typewriter give him some "thirty rock," which Chase immediately burns and takes some hits. Typewriter drives to Cabela's where they break into the store and steal guns and ammo. As they flee, they get a flat tire but keep driving.

At a gas station, they meet Travis, a semi-truck driver who trades Chase some drugs for guns. Chase gets higher. Travis warns them that the zombies are part of the end of days, the Apocalypse. He also says there’s a zombie virus that affects only healthy people. Suddenly the giggling zombies attack. After firing many rounds, Chase and Typewriter jump back into the car and leave behind Travis who is calling out for help as the zombies close in on him. Chase comes to the realization that "certain people are meant to make it, others aren't."

The Battle:   I was not looking forward to having the fantastical short-story collection Electricity & Other Dreams battle the vulgar, coarse, offensive, dark, zombie-apocalyptic novel Fiend because believe it or not, I really like both books so far.

Electricity & Other Dreams, in the first 50 pages, offers me short stories to ponder. Fortunately, each one was so unique that I never knew what to expect or knew in which direction the characters would go. "The Time of the Wolf" began in a what-seemed-to-be normal Middle Eastern bazaar but it progressed into the world of weird. "When the Plumber Drank the Ghosts" began with some humor and then took me on a trip into the fantastic. Bits of imagery are still with me: the plumber's "right hand was always twisting, working a wrench that wasn't there." "Dessa and the Can Hermit" began creepy and ended creepier. All stories contained vivid imagery.

Entering, again, the world of Fiend, I found myself on a wild ride with drugged-out Chase and his companion Typewriter, who seemed to take control of the situation as Chase became more and more brain-fried with every chapter. The only downside was the continued drug use – can Chase's brain have any functioning part left?

I still enjoyed the distinctive crude metaphors in Fiend, although some made me blush. Their uniqueness, though, deserves recognition in a sea of books out there that use the mundane and recognizable. For example, after taking a hit of "thirty rock," Chase's "smoke expelled with a sigh like pissing in a pool." Chase and Typewriter meet Travis "with eyes like train tunnels and a jaw like a gear shift."

But after reading 50 pages of each book, I (Jackie) must choose a winner to move on in the Battle of the Books. It saddens me that one of these books will not move forward. Although both books have tremendous merit because they are so well-written and captured my interest with their bizarre twists and turns, there is one book that calls to me a millionth of a fraction more.

THE WINNER: Electricity & Other Dreams by Micah Dean Hicks

Electricity & Other Dreams advances to the semifinals to take on either The Best of All Possible Worlds by Karen Lord or The Secret of Abdu El Yezdi by Mark Hodder.

To see the whole bracket, click here.
Posted by Fantastic Reviews at 12:17 PM