"Atheism and Flight" by Dominica Phetteplace :: Aaron's Story Recommendation of the Week 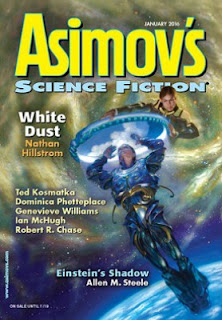 So I've been homebound for a while, recovering from a spot of surgery, and taking the chance to catch up on some of the recently published short fiction in the field. Which is to say, Story Recommendation of the Week is officially a thing again!

My first 2016 Story Recommendation of the Week is for "Atheism and Flight," a novelette by Dominica Phetteplace, from the January 2016 issue of Asimov's Science Fiction.

In the near future, our first-person protagonist Bos is despondent over the loss of an arm in an accident. He moves in with his best friend Jimeo and his girlfriend Cleo, who soon moves out. ("I felt like a child of divorce.") Bos determines he's not merely going to overcome his injury, he is going to transcend it.

He begins to plan joining up with a group of mystical canyon-leaping daredevils. His body seems to share his fierce ambitions, as before long his arm begins to regenerate.

This is a nicely constructed piece, with an elegant style and wonderful interactions between the characters throughout. I love how Bos's search for transcendence plays out through the end of the piece.

I confess I don't know much about Dominica Phetteplace, other than she is a Clarion grad, whose fiction has been popping up in Asimov's, Clarkesworld, Flytrap, and other places in the past five years. Here's looking forward to much more of her work!
Posted by Fantastic Reviews at 1:06 PM