"Everybody Loves Charles" by Bao Shu :: Aaron's Story Recommendation of the Week 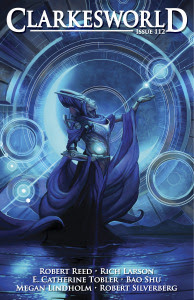 My Story Recommendation of the Week goes to "Everybody Loves Charles," a novella by Chinese author Bao Shu, translated by Ken Liu, from the January 2016 issue of Clarkesworld Magazine.

In "Everybody Loves Charles," a brain implant technology called "livecast," allows the ultimate reality TV-style entertainment: people can experience everything happening to a celebrity as if it were happening to them. The most popular livecaster is Charles Mann, a brash spaceship racer, author, and womanizer. His legions of fans, including our viewpoint character Takumi Naoto, spend most of their days wired up, living Charles's life vicariously in preference to their own comparatively bland existences.

"Everybody Loves Charles" moves along at an easy-to-read pace, and I found the story most entertaining. Bao Shu describes how livecasting works, both technically and socially, in extensive detail, until the story feels more believable than perhaps it should.

Charles begins the story as something of a jackass, but I didn't mind, because I was pretty sure he was headed for some surprises. and because Bao Shu uses Charles's lack of self-awareness to humorous effect; for instance, when Charles earnestly lectures his audience on the importance of being true to themselves.

I wasn't quite so enamored with the second half of the tale, which turns to melodrama as we learn that the creators of the livecast technology are seeking to use it to control everyone in the world and eliminate all individuality. I don't believe there really are many people devoting their days to that cause, but perhaps if I lived in China I would.

Bao Shu is the author of four novels, including the award-winning Ruins of Time, and some 30 pieces of short fiction. "Everybody Loves Charles" originally appeared in Chinese in Science Fiction World in September 2014, and went on to win several Chinese SF awards.  A thank you also goes to Ken Liu, who has been taking quite a lot of time out of his own very successful writing career to translate Chinese science fiction, to the great benefit of the English-speaking SF community.
Posted by Fantastic Reviews at 7:51 AM