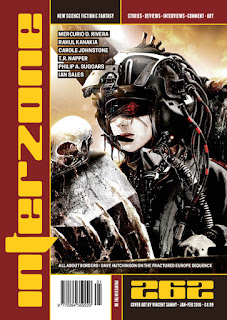 My Story Recommendation of the Week is for "Empty Planets" by Rahul Kanakia, from the January-February 2016 issue of Interzone Magazine (cover art by Vincent Sammy).

One of my favorite little sub-genres of science fiction is far-future, post-scarcity stories where people sit around wondering what the hell to do with themselves.

An example I recently dusted off and enjoyed was Don't Bite the Sun by Tanith Lee from 1976, where young people work their way though a great but not inexhaustible supply of decadent and pointless ways to waste their time. Tanith Lee played the concept tongue-in-cheek, but in "Empty Planets," Rahul Kanakia applies a somber approach I like even better.

"Empty Planets" takes place in a distant future run by a (mostly) benevolent artificial intelligence called the "Machine." The humans' needs are all provided for, and so they pass their time to no apparent purpose. The students at Non-Mandatory Study are a possible exception. But when our protagonist David attends the school on a whim — he believe he has a deep thought inside that he hasn't learned to articulate — we soon find that the students have little love of learning; they simply want to answer one of the questions posed by the Machine, in order to win "shares" as a bounty. An additional share allows one's family to expand, and it's about the only commodity in this universe that people still covet. David does not much approve:

David falls for Margery, an intense student from a colony slowly dying for lack of shares. They travel to Altair III to study its mysterious, possibly sentient clouds hoping for a bounty, and perhaps they will find themselves there.

"Empty Planets" does a wonderful job of depicting a strange, far-future universe whose residents have problems that seem not very different from our own. And, spoiler alert, Kanakia is wise enough not to try to offer the answers to those problems.

Rahul Kanakia's short fiction has appeared in Clarkesworld, Apex, InterGalactic Medicine Show, and other places. His first book, a contemporary YA novel confusingly titled Enter Title Here, is due in August.
Posted by Fantastic Reviews at 9:45 AM