"The Demon in the Page" by Joshua Phillip Johnson :: Aaron's Story Recommendation of the Week 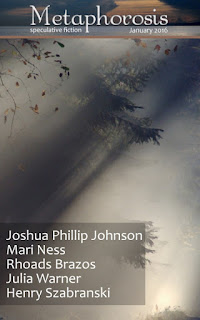 This week's Story Recommendation of the Week goes to "The Demon in the Page," a short story by new author Joshua Phillip Johnson, from the inaugural January 2016 issue of Metaphorosis Magazine.

Let me first say, you gotta be in the right frame of mind for this.

"The Demon in the Page" is about scholars laboriously translating ancient texts. There is no action at all; really nothing ever happens. But if you try to follow Johnson into his characters' minds, you realize these people have willingly devoted their lives to this work, and a new way of understanding the process of translation is the most exciting thing that could happen to one of them.

Mahj, a celebrated scholar, believes she has found a new way to conceptualize the inherent difficulty of translating ancient texts, and shows a draft article explaining her concept to her student Ochre:

“Translators,” he read from the article, “offer the metaphor of a mathematical equation, but I instead offer the metaphor of a woman on a horse. This woman is clothed in resplendent garb, and her horse clip clops proudly. The woman rides into the thick, dark wood of translation, a place never touched by the light of a sun, and when she emerges from the other side, she is very nearly the same. Her clothing is still impressive, though the colors have shifted somewhat. And she no longer rides a horse, or perhaps she does, but this horse has a long, leathery tail and wings made of ash. And the woman’s hair has grown and turned curly where it was once straight.”

“You can accuse me of purple prose if you like,” Mahj said, smiling, her enthusiasm preventing her from seeing the anxiety and worry in her student’s face and voice.

“Translators today spend their days examining this new woman and this new horse, categorizing and codifying the changes, questioning their meaning. But we have missed a very important question. Whom did the woman meet in the wood?”

“The demon,” Mahj whispered, sweeping a hand over the books on her table.

Mahj begins looking for the demon in the texts she translates. The trouble is, she doesn't seem to regard this as a metaphor. Ochre clearly believes Mahj is losing her marbles, but has far too much respect for his mentor to say so.

"The Demon in the Page" does a terrific job of portraying the mentor-mentee relationship, which we don't see often enough in SF/F. The characterization is excellent, and I was most satisfied with how the story played out, even if nothing much ever happens.

"The Demon in the Page" is the first published story by Minnesota teacher Joshua Phillip Johnson. One wonders if he will still write a piece like this a few years from now. By then, he'll have gotten a lot of great advice from fellow writers in workshops and writers' groups about how to punch up his fiction and get the readers absorbed in the action early on, and none of that advice will be wrong. But it isn't always right either.
Posted by Fantastic Reviews at 2:47 PM

I'm glad you enjoyed "The Demon in the Page". I thought it was a great choice to start the magazine off right, and set the tone for the kind of thing we publish. We've got new stories coming out every Friday (about a dozen so far, on a broad range of themes), and I hope you and your readers will come check them out.

Thanks for that, and keep up the good work!