The Life Engineered by J-F. Dubeau vs. Asteroid Made of Dragons by G. Derek Adams :: Battle of the 2016 Books, Bracket One, First Round, Battle 2 of 8 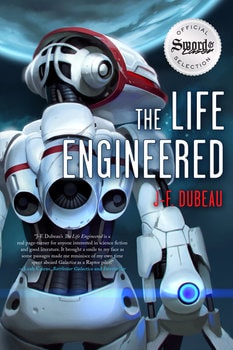 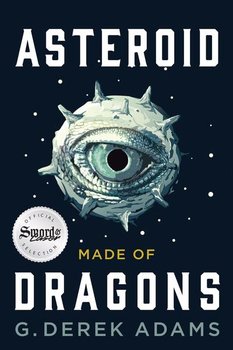 By random chance the second match-up in the first round of Bracket One of the Battle of the 2016 Books features two books from Inkshares' new Sword & Laser imprint, The Life Engineered by J-F. Dubeau and Asteroid Made of Dragons by G. Derek Adams. The winner will be the book I (Aaron) most want to continue reading after 25 pages.

The Life Engineered: Sword & Laser, 240 pages, March 2016, cover art by Eric Belisle. The Life Engineered is far-future science fiction, but if the opening section is any guide, it features flashbacks to more familiar settings.

The novel opens in the year 3594, where our descendants share multiple worlds with robots called Capeks, with a (probably unnecessary) explicit tip of the hat to Czech author Karel Capek, who coined the term "robot." An onslaught of gamma radiation is driving humans into hibernation, to be awakened by the Capeks when the problem is past. But fearing that a subset of the Capeks has created the problem, the humans conceal their whereabouts from most of the Capeks. Flash forward to 5638, when a new Capek is being created, one supposes into a universe where humans are only remembered as legend.

In between these two far-future scenes, however, we meet Mel Paulson, a police officer and modern-day single mother. Mel worries about the effect on her young son of her brutal early morning hours, but then matters quickly get worse as she finds herself in a hostage situation, a crisis that ends with Mel being shot in the head. It turns out that Mel's life was one of hundreds of simulated lives our protagonist Capek, Dagir, has lived through to allow his individual personality to coalesce.

The novel's prologue shows us a theater troupe preparing for a new play, but we have no idea yet how that relates to the main storylines. Then in Chapter One, a goblin researcher named Xenon uncovers an ominous message warning of the coming of Zero. Finally Chapter Two introduces us to (I suspect) our main characters, Jonas & Rime. Rime is a lady mage, Jonas her assistant and bodyguard. We meet them as Rime attempts to escape from stealing her own money back from her bank, pursued by its determined golem guard. This scenario ends with Jonas carrying her back to their rented room. When she wakes, Rime declares her intention to travel to Gilead. Jonas insists on accompanying her, even though we know he was exiled from Gilead for killing his last master.

The Battle: This is a close one.

There were two things I especially liked about the opening pages of The Life Engineered. First, Dubeau built some real tension with Mel's hostage crisis. But it seems that was a one-off bit; I don't expect Mel to return to the story, except insofar as she is incorporated into Dagir's personality. Second, I like the concept of having Dagir live through a series of simulated lives in order to develop a unique personality. In our last battle, I said the key to winning in the first round is to pull me into the story, and after 25 pages, I'm more interested in Dagir's storyline than in the plot of Asteroid Made of Dragons.

Having said that, Dagir's primary storyline is set in the distant future, yet so far the scenes of the future in The Life Engineered have rather a dated feel, as if Dubeau is emulating early Asimov or perhaps even Eando Binder. As far as we know from the narration, the scenes are set in empty white rooms, with none of the strangeness or lushness modern readers expect in far-future settings.

I can still enjoy early Asimov (Binder not so much), but I think G. Derek Adams has the better notion here, going for the style of Terry Pratchett. Of course, Adams is not there yet; one wouldn't compare Asteroid Made of Dragons favorably with an actual Discworld novel, but there are enough funny moments and good lines to say that he is on the right track. For instance, Jonas's surprise at the ease of his getaway while hauling Rime's unconscious form feels very much like a bit Pratchett might have done:

This is one of those times that Master would talk about. Where you were supposed to run into trouble, but Trouble spilled morning coffee on his tunic and got a late start. Jonas could see his master's lean face spreading into a low chuckle. But don't worry, young man. Trouble always keeps his appointments, late or no. Enjoy the days you missed him because he'll be double furious next time around.

Adams pulls even in this Battle of the Books with his amusing writing style, and then the clincher comes in the last few pages of Chapter Two. Rime stutters through asking Jonas if he will come along to Gilead, obviously hoping he will, even as she is uncomfortable at realizing how attached to him she has become. And Jonas declares that he will come, even though he knows that because of his history, she would likely be better off without him. It is the kind of simple but charming scene that makes one want to keep reading.

THE WINNER: Asteroid Made of Dragons by G. Derek Adams

Asteroid Made of Dragons advances to the second round to face Phantom Effect by Michael Aronovitz.

To see the whole bracket, click here.
Posted by Fantastic Reviews at 8:40 PM