Company Town by Madeline Ashby vs. Xenowealth by Tobias S. Buckell :: Battle of the 2016 Books, Bracket One, First Round, Battle 3 of 8 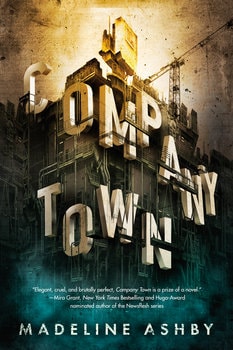 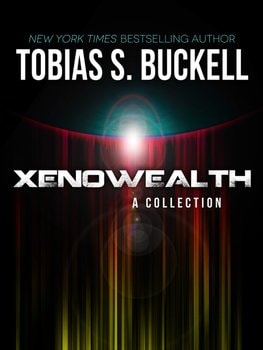 For the third battle of Bracket One of the Battle of the 2016 Books we have Company Town by Madeline Ashby doing battle with Xenowealth: A Collection by Tobias S. Buckell. The winner will be the book I (Aaron) most want to continue reading after 25 pages.

Company Town: Tor hardcover, 285 pages, May 2016, cover art by Erik Mohr. The eponymous Company Town is a huge floating city called New Arcadia, which the dust jacket tells us is actually a ginormous oil rig. Our heroine Hwa is a young woman with no bio-enhancements, who nevertheless earns a living as hired muscle, serving as a bodyguard for the United Sex Workers of Canada and teaching a self-defense class. While keeping an eye on some of her charges at a protest against Lynch, the megacorporation that has just purchased New Arcadia, she dukes it out with a man apparently brandishing a rifle. In fact, it was a long-range microphone. The fellow carrying it works for Lynch, and is so impressed with Hwa's fighting skills, he offers her a job also working for Lynch, which she is reluctant to accept.

Madeline Ashby is a Toronto writer whose previous books were the well-received Machine Dynasties series, vN and iD.

Xenowealth: A Collection: Self-published trade paperback, 192 pages, January 2016, cover art by Jenn Reese. Xenowealth is a collection of short stories set in Buckell's successful Benevolent Satrapy future history, often referred to as the "Xenowealth series," which includes the novels Crystal Rain, Ragamuffin, Sly Mongoose, and The Apocalypse Ocean. The opening 25 pages covers "The Fish Merchant," Buckell's first published story, in which a fish seller in Macau decides to risk helping the enigmatic Caribbean man called Pepper, and the first half of "Manumission," in which a memory-deprived Pepper tracks down a dangerous woman seeking to get off planet. Buckell's strange aliens have yet to make an appearance onstage.

Tobias S. Buckell, originally from Granada, now lives in Ohio. Xenowealth is a crowd-funded (through Kickstarter) self-published book, as Buckell experiments with how best to earn a good living writing in today's shifting publishing market.

The Battle: This battle is between two near-future science fiction adventures, both with a post-cyberpunk feel.

When judging two so similar books, the first question is whether either author has committed any failure in their execution of the central concept that would knock them out of contention. But Madeline Ashby and Tobias S. Buckell are not about to make matters so easy for me.

Through 25 pages, both Company Town and Xenowealth are very well written, with intricate worldbuilding, strong characterization, and both engaging action sequences and effective quiet moments. This is the type of excellent writing we expect to see in the Final Four of the Battle of the Books. It is the authors' misfortune that they face each other so early in the bracket, and my misfortune that I must already choose between two books I am so far thoroughly enjoying.

Xenowealth starts with the potential disadvantage of being a collection of short stories. Collections can face an uphill fight in the Battle of the Books because even if the first couple stories are very strong, they may not necessarily leave the reader anxious to read other unrelated stories. But Xenowealth is a collection of linked stories set in the same future and featuring the same key character. After 25 pages, I am already absorbed in Buckell's cutthroat future and his sullen protagonist Pepper.

But I am also already absorbed in Ashby's Company Town, and just a little bit more so. A few small points combine to make the difference. First, I am very interested in Ashby's oil-rig city, which feels very lived-in and believable. Second, while both books' main characters are strong and tough, Buckell's Pepper so far seems invincible, while Ashby's Hwa has a hint of vulnerability that makes her to me a more compelling and sympathetic character. Third, there's a dash of humor in Company Town, as when Hwa teases a tough guy she has encountered before, expressing how glad she is that they did a good job reattaching his retina. She is a spunky protagonist in a distinctive future setting, and I want to read more about her.

Company Town advances to the second round, to take on either The High Mountains of Portugal by Yann Martel or Borderline by Mishell Baker.

To see the whole bracket, click here.
Posted by Fantastic Reviews at 11:38 AM