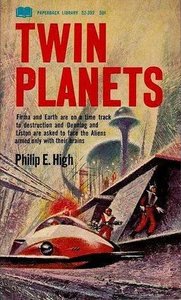 
This is another book from my stack of vintage books. I decided to feature Twin Planets because it has, in my opinion, an interesting science fiction cover. The cover shows a domed vehicle, oddly clothed futuristic people, and a cityscape with a tower that wouldn't look out of place in an episode of The Jetsons. From the blurb and the several reviews I read, which were generally favorable, I gather this book involves speculative dangers more common in science fiction of the 1960s than today. My copy of this book is in good condition, although the spine of the book is a bit off square. The cover graphic shown was found on the Internet. As in previous 1960s books I've featured, the pages have yellowed and the print font is small. I haven't read this science fiction book, so I can't say more. Perhaps something from my bookshelf to add to my to-be-read list?
Posted by Fantastic Reviews at 6:38 PM