Aaron's Book of the Week :: The Cyberiad by Stanislaw Lem 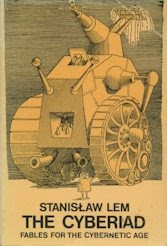 The Cyberiad is an example of Lem's satires, many of which were inspired by the political systems he lived under. Lem survived the Nazi occupation of Poland, concealing his Jewish heritage and working as an auto mechanic, sabotaging Nazi vehicles. He published most of his work while Poland was under communist rule. While he did have occasional run-ins with the state censors, Western readers often marveled that he was able to get most of his satirical work published, and very widely read, in Eastern Europe and the Soviet Union. Apparently his choice to write in the science fiction genre, which party officials did not seem to understand might make real-world statements, combined with his remarkable facility with language allowed him to get his point across without alerting the censors.

Unfortunately, readers in English are in a poor position to judge Lem's way with words, since much of his work in English has been translated not once but twice, first into German or French and from that into English. The Cyberiad is an exception, translated directly from Polish by Michael Kandel, whose skills as a translator are evident. The first portion of the book, for instance, involves an inventor who creates a machine that can make anything that begins with the letter "n", and trouble commences when someone tells it to make nothing. This passage is very funny in English, even though the translation must have been a n-nightmare.

If we can keep any more of the leading voices of science fiction from dying this week, we will return to our oft-postponed history of the pulp magazines next week.
Posted by Fantastic Reviews at 2:17 PM