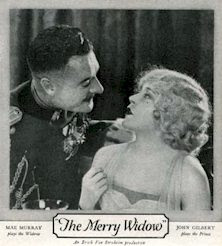 This month's silent movie is The Merry Widow (1925), running time 137 minutes, based on the 1905 operetta of the same name by Franz Lehár. Many characters and scenes were changed in this Hollywood adaptation. The director, the talented and controversial Erich von Stroheim, is co-credited with writing the screenplay.

After a memorable evening, Danilo asks Sally to marry him. But the King and Queen, upon hearing Danilo's plans, forbid the marriage. Thinking she was jilted, Sally marries rich, old Baron Sixtus Sadoja (Tully Marshall). The Baron dies soon after. After a mourning period, Sally emerges as "The Merry Widow" in Paris. The King and Queen of Monteblanco don't want the Baron's millions to leave the kingdom. Egotistical Crown Prince Mirko goes to Paris to woo Sally, and Prince Danilo, who still cares for Sally, follows him.

The Merry Widow shows men dressed in uniforms covered with medals, and ladies in fabulous gowns and feathers. There is unheard waltz music, dance sequences, interesting crowd scenes, plot twists, and exotic details. It's an entertaining, well-done step away from reality, where you cheer for the hero. There's even a duel. The Merry Widow was one of the top films at the box-office in 1925.

Trivia: Joan Crawford and Clark Gable were extras in this film.
Posted by Fantastic Reviews at 10:10 AM