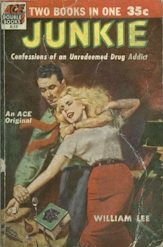 The Book of the Week is Ace Double D-15, by far the most collectible of the Ace Double line. Published in 1953, Ace D-15 combines two early novels in the "juvenile delinquent" genre: Junkie by William Lee and Narcotic Agent by Maurice Helbrant. Junkie is the important one. Junkie was a first novel, detailing the unknown author's real-world struggles to overcome his heroin addiction. The book was ignored when published, but retroactively became famous when William Lee turned out to be the pseudonym of William S. Burroughs. After writing Junkie, Burroughs managed to overcome his addiction and become a hugely influential Beat Generation author, famous for such avant-garde works as Naked Lunch and Nova Express. Among the many artists Burroughs influenced were a number of authors in science fiction's New Wave and cyberpunk movements, and British SF magazine Interzone is named for one of his books. (You knew an SF connection was coming, didn't you?)

The story is that Burroughs had little interest in writing, but Allen Ginsberg encouraged him to give it a try, and Burroughs decided that if their friend Jack Kerouac could get a book published, it couldn't be all that hard. Junkie was rejected by all the publishers to whom Burroughs submitted it, and might never have been published except that Ginsberg was admitted to the same psychiatric hospital as the son of the owner of Ace Books, who persuaded his father to give the book a chance (although Ace insisted on cutting out the descriptions of Burroughs' homosexual experiences). This sale in turn prompted Burroughs to start work on Naked Lunch, and his career quickly took off from there.

Next week's Magazine of the Week will honor mystery writer Mickey Spillane, who passed away last week. And, yes, there will again be a science fiction connection.
Posted by Fantastic Reviews at 9:33 PM