Aaron's Book of the Week :: Alone Against Tomorrow by Harlan Ellison 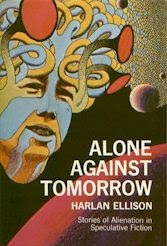 The Book of the Week is the first edition of Alone Against Tomorrow (1971) by Harlan Ellison, cover art by Brad Johannsen. Alone Against Tomorrow collects 20 Harlan Ellison stories on the theme of alienation. Since this is a favorite subject of Ellison's, this book contains some of his best work, including "I Have No Mouth, and I Must Scream", "'Repent, Harlequin!' Said the Ticktockman", and "Pennies, Off a Dead Man's Eyes".

I purchased this book by mail from the author, who signed and inscribed it for me. It remains the only signed copy I have of any of Ellison's books, which leads us into a typical Harlan Ellison anecdote. When Ellison was a guest of honor at a horror convention in Denver, I went to his scheduled book signing. Ellison had to leave before he could get to the end of the line, but he assured the rest of us that we could grab him at any time during the convention to have him sign our books. When I actually tried to do this an hour later, he very loudly berated me for my audacity and stormed off. This did not offend me as much as it probably should have, since all of Ellison's fans know that his absurdly snappish temperament is part of Ellison's shtick. Even into his seventies, Harlan Ellison has never discarded his self-image as a young rebel. Next week's Book of the Week will be an early Ellison book about young rebels.
Posted by Fantastic Reviews at 10:46 PM