Aaron's Book of the Week :: Dune by Frank Herbert (hardcover) 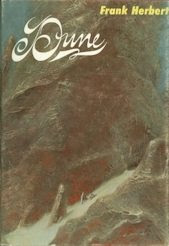 The Book of the Week is Dune by Frank Herbert. This is the first hardcover edition, but unfortunately not the first printing. When collectors describe a book as a "first edition," what they really mean is "first edition, first printing." The Book of the Week was not part of the very first print run of Dune in 1965, but instead a later print run (the seventh) in 1966. The cover looks exactly the same as the first printing, and the book is distinguishable from the first printing only in that (i) the price on the inside flap is $7.95 instead of $5.95, (ii) it is bound in red cloth instead of blue, and (iii) the copyright page does not have the words "First Edition" and contains a row of numbers beginning with the number "6," indicating that it was printed in 1966. What's the difference? About $5,000 on the collectors' market.

Because Dune was rejected by every major science fiction book publisher, this first edition of Dune was printed by Chilton, a small publisher best known for its auto repair manuals. As a novice SF publisher, Chilton made the foolish mistake of beginning the book with an 18-page glossary of terms used in the novel. Despite this daunting opening, Dune quickly became a huge commercial success (hence the multiple printings) and won Hugo and Nebula Awards for Best Novel.

The cover of the Book of the Week is by John Schoenherr. This same cover art had already appeared on the cover of the January 1965 issue of Analog magazine, which contained Part I of The Prophet of Dune, the second half of the novel. This was much better than Schoenherr's original Dune artwork, but for some reason Schoenherr was asked to do a new cover for the first paperback edition, next week's Book of the Week.
Posted by Fantastic Reviews at 9:38 PM

I have a hardcover edition of Dune
published by Chilton that has the $5.95 price on the inside dust jacket flap; however it does not have the blue boards but the red one. The inside copyright page states "first edition".
Does anyone know how many 1st editions were printed by Chilton and what is the value of the red board edition?
Thanks,
Victor

I believe the red boards indicate a 1965 1st edition Book Club Edition (BCE) that was printed with the same plates as the 1st edition, 1st printing.

Not necessarily. A first edition "red" cover was printed simultaneously with the Ontario edition in 1965. I don't know if that made it more or less valuable, though.

we found a 1965 red board hard cover at a flea market... It has no price on the jacket flap, (one corner of the front inside is cut away for some reason), but says only 1965... Does anyone think this may be a non-bookclub first edition as michael mentioned?

The edition Michael is describing would still say the words "First Edition" on the copyright page. If you don't have that or a number line, then it's probably a book club edition, with the "Book Club Edition" notation clipped off the dust jacket.