Aaron's Book of the Week :: The Thing from Another World by John W. Campbell, Jr. 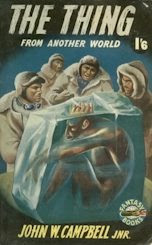 The Book of the Week is The Thing from Another World, a collection of short fiction by John W. Campbell, Jr.

While John W. Campbell, Jr. is best remembered to fans of literary science fiction as an influential editor, his greatest direct impact on pop culture was writing the story "Who Goes There?", which Hollywood filmed as The Thing from Another World in 1951 and again as The Thing in 1982. The Book of the Week is a paperback reprint of the hardcover first edition titled Who Goes There? (1948). While the original hardcover edition predated the first movie, this paperback edition came out afterwards, and the book's title was changed to take advantage of the movie's success. This paperback edition was published by small British publisher Fantasy Books in 1953 (I think -- there is no date listed on the book). Since it appeared only in England with a small print run, this book is actually more difficult to find than the hardcover first edition; on the other hand, unlike the hardcover, it doesn't cost you $500 if you do find it.

Before he reshaped the genre of science fiction as editor of Astounding magazine, John W. Campbell, Jr. was an important influence on the field through his own writing. While he wrote traditional space opera under his own name, the moody and stylish stories he wrote under the pseudonym Don A. Stuart were his most ground-breaking works. The seven stories in the Book of the Week were all originally printed under the Don A. Stuart byline between 1934 and 1938, and they comprise much of Campbell's best fiction.

It is sometimes said that by the early 1950's Campbell had ceased to be an important influence on the field of science fiction. It is certainly true that in the 50's and 60's Campbell did not dominate SF as he did in the late 30's and 40's; however, the idea that he was no longer doing important work as an editor is belied by a single novel that he purchased and serialized in Astounding after every major book publisher had turned it down. The first installment of this landmark novel is next week's Magazine of the Week.
Posted by Fantastic Reviews at 10:16 PM