Aaron's Story Recommendation of the Week :: Daughter of Bótù by Eugie Foster 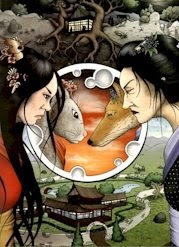 My story recommendation for this week is "Daughter of Bótù" by Eugie Foster, from the August 2008 issue of Realms of Fantasy (story illustration by Jada Fitch).

"Daughter of Bótù" is a fairy tale with an Eastern flavor. It is the tale of An-ying, a rabbit transformed into a young woman, who quickly falls in love with a prince. The premise may sound routine but it soon turns into something memorable, thanks to Eugie Foster's gorgeous prose and to the twists the story takes as the love between An-ying and her prince becomes rather complicated.

In the past five years, Eugie Foster has published an impressive volume of interesting short fiction, commonly with an Asian setting and feel. Her collection Returning My Sister's Face and Other Far Eastern Tales of Whimsy and Malice is due out early in 2009 and is one to watch for.

The August 2008 issue of Realms of Fantasy has an impressive list of contributors, including Liz Williams, James Van Pelt, Carrie Vaughn, and Jim C. Hines, but even among such strong company, I found "Daughter of Bótù" the clear standout.
Posted by Fantastic Reviews at 10:51 PM

Thanks for your very kind words. I'm delighted you enjoyed "Daughter of Bótù," and I'm honored you chose it as your story recommendation of the week!

You're very welcome. Thank you for writing such a terrific story!