Aaron's Book of the Week :: The Hook by Donald E. Westlake 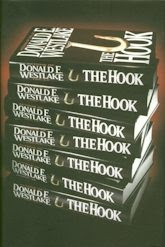 Returning to BOTW's obituary function, the Book of the Week is The Hook by Donald E. Westlake, in honor of Mr. Westlake, who passed away last week at the age of 75. This is a signed first edition (with a cool recursive cover that for some reason was not used on the paperback), yet easier to find than some of the beat-up Westlake paperbacks you will see starting next week.

Beginning in 1960, Donald Westlake published over a hundred novels. He wrote in many genres, but was best known for his mysteries. Three times he won the Edgar Award from the Mystery Writers of America, which named him Grand Master in 1993. At least 16 of his novels were produced as films, notably Point Blank (1967, starring Lee Marvin and Angie Dickinson), remade as Payback (1999, starring Mel Gibson). Westlake also wrote original screenplays and adaptations of other authors' books, and was nominated for an Oscar for his screenplay of the 1990 film The Grifters.

Westlake was a favorite of fellow writers for his crisp prose and his blend of humor and suspense. And he was a favorite of collectors for his use of multiple pseudonyms. Westlake liked to match his pseudonyms to different styles. The novels under his own name were usually comic mysteries, although some, including The Hook, were psychological thrillers. But most of Westlake's mysteries under pen-names were in a much grittier noir style. Next week, we will start our survey of Westlake's alter egos with by far his most successful pseudonym.
Posted by Fantastic Reviews at 10:59 AM