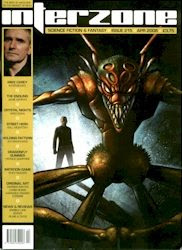 My story recommendation of the week is "Crystal Nights" by Greg Egan, a novelette from the April 2008 issue of Interzone.

From what I have read recently, I am not sure that Interzone is quite as strong overall as it was a few years back. Still, the occasional presence of Greg Egan, the leading hard science fiction author of this age, is more than enough reason to keep an eye on the magazine.

"Crystal Nights" is a modern updating of Theodore Sturgeon's "Microcosmic God." A very wealthy man corners the market on an advanced form of crystallized processor, which allows computations at such tremendous speeds that he believes he can use it to evolve artificial intelligence through an electronic version of natural selection. Hopefully it is not too much of a spoiler to say that after some false starts the system succeeds, but the resulting digital beings are not as deferential to their creator as he might wish.

"Crystal Nights" examines moral issues surrounding the creation of artificial intelligence -- for example, is it all right to alter or erase a computer program that is showing signs of becoming self-aware? -- issues that may not be so far in the future as you think. By drawing his title from the terrible persecution of Jews in Nazi Germany, Egan lets us know that he does not regard these as trivial concerns.
Posted by Fantastic Reviews at 10:29 AM