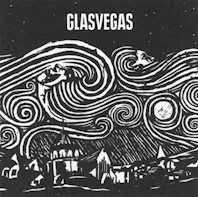 Continuing my count-up, as opposed to a countdown, of NME's top albums of 2008, at #3 is Glasvegas.

I bought this album soon after its September release because NME was calling Glasvegas the best new band in Britain.

Glasvegas are a Scottish alternative rock band from Glasgow. The band consists of James Allan (vocals and songwriter), Rab Allan (guitar), Paul Donoghue (bass) and Caroline McKay (drums). All the photos I've seen of Glasvegas show them wearing black. Even their album cover is black.

Glasvegas play guitar based music. There are shimmering and reverberating guitars, bass, pulsing drums and tambourine. Backing vocals feature oohs and aahs. Their music is melodic and atmospheric.

The vocals are distinctive. James Allen sings in a Scottish accent which at times is difficult to decipher. Yet he uses his voice as an instrument to add poignancy and emotion to the songs. The lyrics often tell stories from working-class lives.

"Geraldine", the first single off the album and NME's #2 track of the year, starts with these lyrics:

When your sparkle evades your soul
I'll be at your side to console
When you're standing on the window ledge
I'll talk you back, back from the edge

There are explicit lyrics, something I usually frown at. In "Go Square Go" the line "Here we fucking go!" is rousingly repeated.

This is an excellent album, in my opinion and NME’s, definitely one of the best of 2008.
Posted by Fantastic Reviews at 11:39 AM