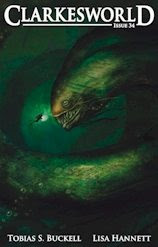 Tobias S. Buckell's related novels Crystal Rain, Ragamuffin, and Sly Mongoose were all well received, but "Placa del Fuego" demonstrates that his style also works well at shorter lengths. You can find most of his short fiction to date in Tides from the New Worlds from Wyrm Publishing.
Posted by Fantastic Reviews at 2:17 PM