Aaron's Book of the Week :: The Time Traveler's Wife by Audrey Niffenegger 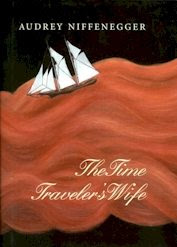 Inspired by the film version released last week, the Book of the Week is The Time Traveler's Wife (2003) by Audrey Niffenegger. This is the signed limited edition with cover art by Niffenegger, who is a visual artist as well as a writer, which I prefer to the standard cover with the empty shoes.

One of the strengths of science fiction is that it can be used to tell traditional kinds of stories in new ways. The Time Traveler's Wife effectively uses science fiction to tell a romance story. The unpredictable nature of time travel creates difficulties for the story's lovers, while also offering a metaphor for problems people encounter in more mundane relationships. Audrey Niffenegger was not the first to use time travel to frame a love story -- see for example, Bid Time Return by Richard Matheson (filmed as Somewhere in Time, starring Christopher Reeve and Jane Seymour) -- but The Time Traveler's Wife is one of the best science fiction romances of recent years. It drew a very large readership, including an awful lot of people who enjoyed it but somehow still think they don't like science fiction. Some will even argue whether it is science fiction at all, even though the SF element is stated right in the title of the book.

Next week we will get back to honoring this year's Hugo Award winners.
Posted by Fantastic Reviews at 10:41 PM

My wife loves this book. Hasn't seen the movie yet though.

But does she still say she doesn't like science fiction?

Now the bigger question -- is this book truly science fiction or is it fantasy? Is the time travel really explained or does it "just happen"?

It's been a while since I read it, but I seem to recall enough hand-waving about something odd in the guy's brain triggering the time travel to qualify as science fiction.

Time travel is like faster-than-light space travel. Even if physicists decide it's totally impossible, it's still grandfathered into SF.