Aaron's Book of the Week :: The Fellowship of the Ring by J.R.R. Tolkien 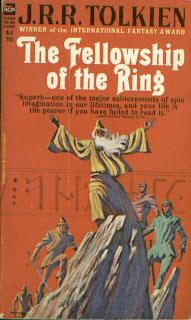 Following up on last week's Hobbit post, the Book of the Week is the first American paperback of The Fellowship of the Ring by J.R.R. Tolkien, with cover art by Jack Gaughan. This is the infamous "pirated" edition, released by Ace Books in May 1965.

Ace initially did not pay Tolkien or his British publisher for the rights to Lord of the Rings, believing the books had unwittingly fallen into the public domain in the United States, due to the excessive number of copies imported here from Britain. (The validity of Ace's position apparently turned on whether one considers a book bound in the U.S. containing pages printed in the U.K. to be an imported edition.) Thus, the Book of the Week contains no copyright notice at all.

Ballantine subsequently published the authorized (and revised, so as to resurrect the copyright) paperback editions and launched a public relations campaign against Ace, with Tolkien actually comparing Ace Books to his villain Sauron. Ace relented and agreed to pay Tolkien for its edition and not to print further copies, thus assuring that the Ace editions would become the copies coveted by subsequent collectors.

Next week: the Ace edition of The Two Towers.
Posted by Fantastic Reviews at 7:20 AM

Labels: Book of the Week, J.R.R. Tolkien, Lord of the Rings