Battle of the Books, Summer 2012, First Round :: The Land of Decoration by Grace McCleen vs. Pure by Julianna Baggott 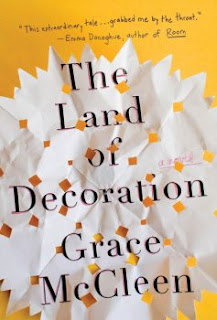 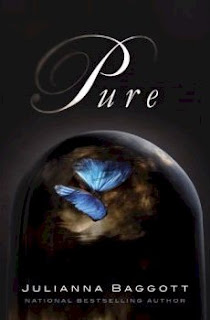 This second to last battle in the first round of the Summer 2012 Battle of the Books features The Land of Decoration by Grace McCleen going against Pure by Julianna Baggott. The winner will be whichever book I most want to keep reading after the first 25 pages.

The Land of Decoration: Henry Holt and Company hardcover, 306 pages, April 2012. Grace McCleen is a UK author and singer-songwriter. The Land of Decoration, her first novel, won the Desmond Elliott novel prize for debut fiction published in Britain. The first 25 pages consists of nearly six unnumbered chapters titled by topic.

Ten-year-old Judith McPherson builds a model of a land in her bedroom out of various bits and pieces. She calls it the Land of Decoration, after a description of the biblical Promised Land. She and her father are Christian fundamentalists living in Wales. They read and ponder the Bible every day.

On the playground, bully Neil Lewis threatens to push Judith's head down the toilet, but then the school bell rings. Judith spends the next days of the weekend worrying about what will happen on Monday. She practices holding her breath, fearing her head will be pushed underwater. She wonders what dying is like and can’t eat much. She briefly considers telling her father, but she doubts he’d believe she’s in danger.

On Sunday morning, Judith goes with her father to the Meeting Hall, which is a large metal shed. Her father’s congregation numbers about thirty, including some eccentric characters. They have a visiting speaker, Brother Michaels, who talks about faith moving mountains and miracles working best with ordinary things. Judith is very impressed with Brother Michaels, and afterword, asks him for some advice.

Pure: Grand Central Publishing, February 2012, 431 pages. Julianna Baggott is a critically acclaimed bestselling author who has written seventeen books, including novels for adults and younger readers, and collections of poetry. Pure is the start of a projected series. The first 25 pages consists of a prologue and a little more than two chapters.

The detonations (nuclear bombs) occurred about nine years ago. Pressia was just six then and hardly remembers. The detonations caused many of the survivors to be melded with various objects. Pressia was holding a doll, and the doll's head became one of her hands. Her grandfather got a small plastic fan lodged in his throat.

Pressia and her grandfather live in the back of a ruined barbershop. Pressia makes windup toy butterflies to barter. The local military regime, called the OSR, requires that all sixteen year olds turn themselves in or be taken in forcibly. Pressia will soon turn sixteen. Her grandfather has built Pressia a sleeping cabinet with a trapdoor to hide in.

Meanwhile, there are other people, the Pures, who were protected from the damaging detonations inside their Dome. Partridge and the other teenage boys at the academy are subjected to "coding sessions" to give them new skills. Partridge is pulled out of a history class to meet with his father, Ellery Willux, a head scientist. Partridge is not at all close to his father. During their talk, his father implies that Partridge’s mother, who supposedly died helping survivors outside the Dome, may still be alive.

The Battle: This match-up features two books marketed, more or less, as fiction. But the thing is, I (Amy) very rarely read mainstream fiction. Both books feature young protagonists. In The Land of Decoration, Judith’s father believes that it’s only a matter of time until someone blows the world up. In Pure, it's after the bombs have dropped.

The Land of Decoration is contemporary fiction that, so far, lacks in any fantastic element. The book is told in first person in a quirky manner. Despite the young age of the protagonist, this book isn’t written for a YA audience. Judith relates some peculiar personal details about the people she encounters. Some of the fundamental religious aspects, which may be about Jehovah’s Witnesses, make me want to grind my teeth in dismay. Judith's worldview seems so by skewed her religious beliefs.

Pure definitely has fantastic elements, but I found some of them to be unsettling, such Pressia’s doll head hand with the blinky eyes. This book, which has two teenage protagonists living in oppressive near-future societies, appears to be targeted at the YA audience. Yet it's a science fiction book with elements that don’t seem scientifically logical. Maybe it would have worked better for me if it didn’t mention real places, such as Baltimore and DC. I liked the jump rope rhyme of the children outside the Dome.

For me, this battle is a bit of a toss up. Pure has the genre content, but the The Land of Decoration feels more emotionally believable. Both books are well written. Guess I'll pick to continue reading about the Christian pre-teen instead of the post-apocalypse teenagers.

THE WINNER: THE LAND OF DECORATION by Grace McCleen

The Land of Decoration will advance to meet in the second round either Casting Shadows by J. Kelley Anderson or The Mongoliad: Book One by Neal Stephenson, Greg Bear & five others.