Aaron's Book of the Week :: The Hobbit by J.R.R. Tolkien 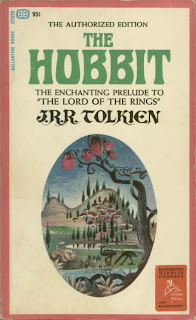 The Book of the Week is The Hobbit by J.R.R. Tolkien.

I used to do "Book of the Week" posts highlighting some of the volumes from my personal book collection, in which I take absurd pride. I ran out of gas (but I sure as hell didn't run out of books) about three years ago——click on the "Book of the Week" tag if you want to sample some of the old posts——but I felt compelled to resurrect the Book of the Week today, when I read that this is the 75th anniversary of the original release of The Hobbit.

As any regular reader of this blog (and pretty much everyone else) already knows, The Hobbit is one of the most beloved classics of modern fantasy, and its author J.R.R. Tolkien arguably the most important fantasist of the Twentieth Century. Sadly, I wasn't around in 1937 to pick up the first edition of The Hobbit, which now runs to tens of thousands of dollars on the collectors' market. But I'm pleased at least to have the first American paperback, published by Ballantine Books in 1965, cover art by Barbara Remington.

Note that this cover has very little to do with the story of The Hobbit——you will search the text in vain for any mention of the ostrich creatures or the goofy-looking lion that appear on the front of the book. Tolkien particularly disliked the lion, and at his request it was airbrushed out of later printings. Artist Barbara Remington had not yet read The Hobbit when she did the cover. This is not quite so irresponsible as it sounds; Ace Books had recently beaten Ballantine to the American market with unauthorized paperback editions of the Lord of the Rings trilogy, and Ballantine rushed The Hobbit to press so as to forestall another pirated Ace edition.

For the next Book of the Week entry, I'll show you the unauthorized Ace edition of The Fellowship of the Ring.
Posted by Fantastic Reviews at 9:27 AM