Battle of the Books, Fall 2012, First Round :: Lance of Earth and Sky by Erin Hoffman vs. Orb Sceptre Throne by Ian C. Esslemont 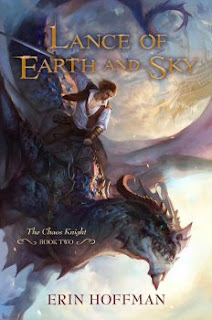 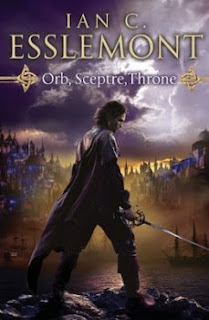 We continue the first round of the Fall 2012 Battle of the Books with Lance of Earth and Sky by Erin Hoffman vs. Orb Sceptre Throne by Ian C. Esslemont. The book I most want to continue reading after 25 pages will advance to the second round.

Lance of Earth and Sky: Pyr trade paperback, April 2012, 315 pages, cover art by Dehong He. This is the sequel to Erin Hoffman's first novel, Sword of Fire and Sea, and the middle volume of the Chaos Knight trilogy, to be concluded with Shield of Sea and Space. Hoffman's short fiction has appeared in such publications as Beneath Ceaseless Skies, Clockwork Phoenix, and Electric Velocipede. She is also a successful video game designer. (She first came into the public eye when she and her husband spearheaded a $15 million class action against game manufacturer Electronic Arts, involving employees' unpaid overtime hours.)

Apparently Vidarian Rulorat, the protagonist of Lance of Earth and Sky, opened a portal between worlds in the previous volume, so now magic is popping up in all sorts of unexpected places. The book opens with Vidarian in magical combat with a rogue seridi elemental. Along with his companions Altair the gryphon and Isri, a friendly elemental, Vidarian encounters in short order the ghost of an old friend, a pack of deadly thornwolves, and an ancient tree-creature.

The first 25 pages of Orb Sceptre Throne bounce us between no fewer than eight viewpoint characters. An archeologist discovers a secret passage beneath the burial grounds south of Darujhistan. A strange man helps a great demon emerge from the sea. An alchemist receives a warning from a fat man and a demon. A young courtesan meets an important councilman who owes all his success to her. A monk confronts a champion duellist. An old woman who is more than she appears awaits her destiny. A former soldier seeking a boat to where the titanic "Moon's Spawn" crashed into the sea is attacked by ruffians. The Malazan ambassador to Darujhistan receives a strange request to secure the burial grounds south of the city. An adventuress and her companion explore the otherworldly "Shores of Creation" where they have been stranded.

The Battle: Following George R.R. Martin's example, many epic fantasies these days de-emphasize the magical elements, in favor of gritty realism, complex character interactions, and a cynical outlook. If you're tired of that approach to fantasy, Lance of Earth and Sky may be up your alley. Hoffman makes no attempt to hold back the fantasy elements, and her narrative flows with a refreshingly breezy attitude. A key scene in the opening pages of Lance of Earth and Sky has the protagonist adopting an adorable litte thornwolf puppy.

But I have not tired of the George R.R. Martin approach to fantasy, and in the opening of Orb Sceptre Throne, Ian C. Esslemont does it just about as well as Martin himself. As in A Song of Ice and Fire, Esslemont's heroes carry themselves with a quiet resignation. Here, for example, a champion swordsman arrives at a monastery to challenge the legendary "Traveller" to a duel, but an old man sweeping the courtyard tells the swordsman he must first prove himself worthy:

"By defeating the least of us."

Esten bit down on his impatience and took a slow calming breath. "And . . . that would be?"

"You . . ." He stepped away as if the fellow were a lunatic. "But you're just cleaning the court!"

A rueful nod. "Yes. And I've yet to get it right. It's the wind, you know. No matter how careful you are the wind just comes tumbling through and all your plans and care are for naught."

The old man merely shrugged his regretful apology once more and raised his broom.

One kick-ass scene like that can take you a long way in the Battle of the Books.

Orb Sceptre Throne advances to the second round, to take on Glamour in Glass by Mary Robinette Kowal.

To see the whole bracket, click here.
Posted by Fantastic Reviews at 9:40 AM