Battle of the Books, Fall 2012, First Round :: Losers in Space by John Barnes vs. Song of the Serpent by Hugh Matthews 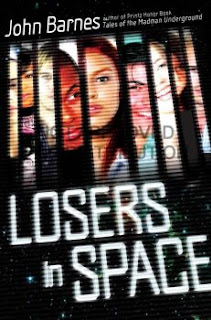 Next up in the first round of the Fall 2012 Battle of the Books is Losers in Space by John Barnes vs. Song of the Serpent by Hugh Matthews. As always, the book I most want to keep reading after 25 pages will continue into the second round.

Losers in Space: Viking hardcover, April 2012, 433 pages, cover design by Greg Stadnyk. Viking does not send us review copies, but I added this book to the Battle of the Books as a wild card, because I am a fan of John Barnes. Barnes has published over thirty books since 1987, including a Hugo nominee, three Nebula nominees, and a whole lot of great stuff. Losers in Space is his second book marketed as YA, after Tales of the Madman Underground, which was a Michael L. Printz Honor Book.

Losers in Space is set in the year 2129, when society has become extremely stratified. 96% of the population does no work, yet they live comfortably on the "social mimimum," all their needs supplied by robotic production. But the highest level of luxury is reserved for celebrities. Our characters are the teenaged children of celebrities, who must soon find fame——defined entirely by on-line hits and links——independent of their families, or they will forfeit their privileged status. One of the group hits on the idea of stowing away on a ship to Mars. The problem with this plan, according to the dust jacket, is the guy suggesting it is a sociopath.

Song of the Serpent: Paizo paperback, May 2012, 309 pages, cover art by Adrian Smith. Hugh Matthews is better known as Matthew Hughes. He has published over a dozen books under that name, most set in his Archonate universe, as well as crime fiction under the name Matt Hughes and media tie-ins under the Hugh Matthews name. He has been nominated for the Nebula, the Philip K. Dick Award, and multiple other honors.

Song of the Serpent is a tie-in to the Pathfinder role-playing game, one of a series of Pathfinder ties recently published by Paizo, featuring such top-notch writers as Matthew Hughes and Tim Pratt. Through 25 pages, Song of the Serpent doesn't require any prior knowledge of the Pathfinder game or of other books in the series. Our protagonist is Krunzle the Quick, a dimunitive but clever thief, who has arrived in the wealthy city of Kerse, only to be thwarted by the powerful wards protecting all the treasures on display. When he finally finds an unguarded tree laden with valuable gems, the reader knows to suspect a trap. The trap has been set by a wizard, who will send Krunzle on a quest with a magical snake for company.

The Battle: Losers in Space came into this one a heavy favorite, because I'm a John Barnes fan, and I love the title. In contrast, I wasn't very interested in Song of the Serpent, even though I know Matthew Hughes is also a good writer, because I have a generally snobbish attitude toward media tie-ins.

But sports fans, that's why they play the game. So far Losers in Space isn't grabbing me, for two reasons. First, the viewpoint character Susan Tervaille is a total mean girl, nor do any of the other characters seem especially likeable so far. Through 25 pages I don't see much reason to care whether they get to keep their privileged status. Second, Barnes is separating out his infodumps in sections called "Notes for the Interested." This is an interesting idea, designed to let readers who don't care about the background details skip over them, but it has the unfortunate side effect of disrupting the flow of the story for those of us who do care about those details.

Meanwhile, through 25 pages, Song of the Serpent is a hoot. The protagonist Krunzle is a lovable rogue, easy to cheer for right from the opening scene, when he is stopped by local "Blackjacket" police. Krunzle defuses the situation by convincing them he wishes to enlist. ("You are a little short," says one of the Blackjackets, "in the crucial area of not being too short.") Hughes spices the narrative with a wry wit that makes for very pleasurable reading. What the tale lacks so far in originality Hughes makes up for with flair and exuberance. I'm looking forward to reading more.

THE WINNER: Song of the Serpent by Hugh Matthews (aka Matthew Hughes)

Song of the Serpent moves into the second round, to face either Auraria by Tim Westover or Zombie Bake-Off by Stephen Graham Jones.

To see the whole bracket, click here.
Posted by Fantastic Reviews at 11:05 AM