The High Mountains of Portugal by Yann Martel vs. Borderline by Mishell Baker :: Battle of the 2016 Books, Bracket One, First Round, Battle 4 of 8 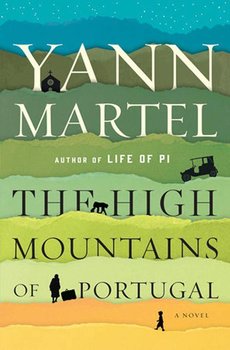 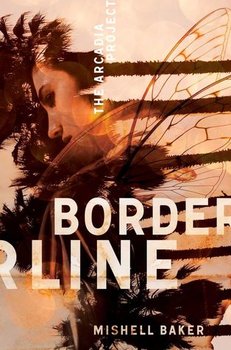 Our fourth match-up of the Battle of the 2016 Books has The High Mountains of Portugal by Yann Martel going against Borderline by Mishell Baker. The winner will be the book I (Aaron) most want to continue reading after 25 pages.

Rather, the story so far is about Tomás, a Portuguese museum curator searching in 1904 for an artifact, which he believes is a magnificent crucifix, described in a strange 17th Century journal Tomás has discovered. Tracing the object to a monastery in the mountains of Portugal, Tomás borrows an automobile from his wealthy uncle to continue the search. We are not sure yet why Tomás is so obsessed with this lost object, but we sense it relates somehow to the terrible personal losses he has suffered. A few years earlier, Tomás lost his lover, his son, and his father to a disease within a single week. The jacket tells us that Tomás is the first of three characters whose stories make up The High Mountains of Portugal.

Borderline: Saga hardcover, 390 pages, March 2016, cover photo by Jill Wachter. Borderline was Mishell Baker's first novel and is the first volume of her Arcadia Project series, which has continued with Phantom Pains and Impostor Syndrome. Borderline was nominated for the Nebula, World Fantasy, and James Tipree, Jr. Memorial Awards for best novel of 2016.

We first meet Millicent (Millie) Roper, the first-person protagonist of Borderline, languishing in a psychiatric center. Millie has two prosthetic legs, earned in a failed suicide attempt while she was studying filmmaking at UCLA. A peculiar woman named Caryl Vallo visits Millie and offers her a job with the Arcadia Project. She won't say exactly what that entails, but it seems the Arcadia Project needs creative people who have borderline personality disorders but have chosen to manage that condition without psychoactive drugs. The dust jacket suggests the job will bring Millie into contact with bizarre creatures from a parallel reality. Millie follows Caryl to an oddly decorated mansion that instantly feels like home.

The Battle: Through 30 pages, both The High Mountains of Portugal and Borderline have given few hints as to what the main storyline will involve. Rather, both authors have successfully pulled me into their narratives by focusing on their damaged but sympathetic protagonists.

In The High Mountains of Portugal, Yann Martel brilliantly shows us Tomás's internal distress, simply by depicting Tomás walking through the streets of Lisbon:

People stare at him as he walks. Some make a comment, a few in jest but most with helpful intent. "Be careful, you might trip!" calls a concerned woman. He is used to this public attention; beyond a smiling nod to those who mean well, he ignores it.

One step at a time he makes his way to Lapa, his stride free and easy, each foot lifted high, then dropped with aplomb. It is a graceful gait.

He steps on an orange peel but does not slip.

He does not notice a sleeping dog, but his heel lands just short of its tail.

He misses a step as he is going down some curving stairs, but he is holding on to the railing and he regains his footing easily.

And other such minor mishaps.

After a few pages, the reader realizes why Tomás is having these mishaps: he is walking through Lisbon backwards. Tomás literally cannot face a world that deprived him of the three people he loved most all at once.

In Borderline, Millie Roper is a character who similarly finds it difficult to confront the world, with the added element that she blames herself for everything she has been through. Here, for instance, Millie tells her kindly psychiatrist (described as resembling Snow White) that she has decided to leave the psychiatric center (after meeting Caryl Vallo). The doctor asks if she is going back to school:

I set my teeth against a familiar sharp throb of pain, like an old war wound. "Of course not."

"You're not a film person, so you don't get it. Getting into UCLA was a huge deal."

I felt my blood pressure rising. I hated optimism; it served only to remind me how inconceivable the depth of my failure was to normal people.

"Yes, I got in, and then I blew it. Even if they would take me back — which they would not — he's still there.

"Who is?" She frowned. "Are we talking about the nameless professor?"

"He has a name. Just because I won't tell it to you, that doesn't mean I'm making him up."

"Millie, if he's real, and he assaulted you, someone needs to—"

"Stop." I held up a warning hand; I could feel something ugly threatening to open up just under my solar plexus, like a door to a spider-infested crypt. "I am not talking about this."

"If not with me, you need to tell someone. Let the authorities decide the appropri—"

"I said stop it!" I grabbed the box of tissues from the table between us and flung it at the wall. Not helping my case for being functional. My heart was racing; my jaw was locked; my breath was coming fast and loud through my nose. The woman across from me was no longer Snow White but an old hag hawking apples.

This is a young woman who has painted herself into a corner with toxic black paint. After only 30 pages, the reader is desperate to see her offered a glimmer of hope, and the Arcadia Project may be just that.

And for me, that's what this battle comes down to. I find the simple depiction of Tomás's pain moving and the prose of The High Mountains of Portugal quite elegant. But I have not yet been given any reason to care about his quest for a lost crucifix. Meanwhile, I know that the Arcadia Project relates somehow to Millie's personality disorder. It offers a hope that Millie may yet come to better understand her own psyche and to make positive use of her talents as a filmmaker and a person. And that makes me want to keep reading.

THE WINNER: Borderline by Mishell Baker

Borderline advances to the second round to face Company Town by Madeline Ashby.

To see the whole bracket, click here.
Posted by Fantastic Reviews at 11:34 AM