Aaron's Books of the Week :: The Centaur and The Witches of Eastwick by John Updike

The Books of the Week are the first paperback printings of The Centaur and The Witches of Eastwick by John Updike (1932-2009). A couple weeks back, before being sidetracked by flu, strep, and other distractions, BOTW raised the question whether recently deceased award-winning author John Updike had ever dabbled in science fiction and fantasy. Regular readers of this column knew better than to doubt it.

Updike wrote science fiction on at least two occasions, The Poorhouse Fair (1959) and Toward the End of Time (1997). More important to his career were Updike's fantasies. Several of Updike's books included elements of fabulation and mythology, notably National Book Award winner The Centaur. 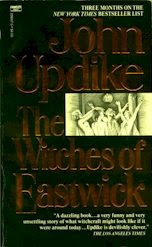 While one may debate whether to call a book like The Centaur "fantasy," there is no doubt that the label applies to The Witches of Eastwick, in which three modern-day women develop magical powers with the help of a diabolical figure (delightfully played by Jack Nicholson in the film).

Beginning next week, we will pay tribute to one of my all-time favorite authors, Philip Jose Farmer, who passed away February 25, starting with his first published story.
Posted by Fantastic Reviews at 8:00 PM