Aaron's Story Recommendation of the Week :: Act One by Nancy Kress 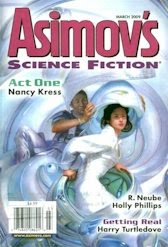 The story recommendation for this week goes to "Act One" by Nancy Kress, a novella from the March 2009 issue of Asimov's.

Late in "Act One," the narrator asks, "Is it wrong to genetically modify human beings?" This is an important question, one about which our society is currently in collective denial, apparently believing we can keep that genie in the bottle. "Act One" is set in the near future, as the technology is becoming available to genetically modify people, either by gene therapy in utero or by delivery of a gene-altering retrovirus. This technology will be developed not far in the future and it will be used, despite any laws we pass against it. "Act One" delves into some of the implications of tinkering with the blueprint for a human.

What's more, these implications are addressed in the context of an absorbing story, involving engaging and complex characters. Particularly compelling is the main protagonist, Barry Tenler, perhaps the best-drawn dwarf character I have seen in science fiction (depending on whether you think Miles Vorkosigan qualifies). He is resentful of his stature and the pain he endures daily but he soldiers on admirably; yet at the same time he is definitely a flawed human being who has made some regrettable decisions in his life -- far more interesting than the traditional plucky little person, a Hollywood stereoptype Barry himself mocks in the story.

As "Act One" begins, Barry is the manager of a beautiful actress whose career is in a tailspin. To prepare her for a role in a film about children who have been genetically altered for increased empathy, they visit a covert group bent on modifyinging mankind for greater compassion, a group prepared to act as ruthlessly as necessary to achieve this end. Is this justifiable? Nancy Kress gives no pat answers, but she asks the question in a fascinating way.
Posted by Fantastic Reviews at 11:32 AM