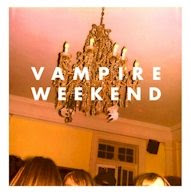 Counting up, as opposed to a countdown, NME's #4 album of 2008 is Vampire Weekend by Vampire Weeekend. Rolling Stone magazine rated this as the 10th best album of 2008. It was released little over a year ago.

The New York Times in a review called Vampire Weekend "Preppie Afro-pop". The band label their own style as "Upper West Side Soweto". To me music seems a mix of genres including Afrobeat, ska-punk, and calypso.

In their music there are repeated sequences of notes on guitar, pulsing keyboards, and racing drums. Various songs feature harpsichord, violin, cello, mellotron, and hand drums.

"A-Punk" is a catchy tune, clocking in at a mere 2:17. Musically it's like ai!-ai!-ai! punk, but lyrically it's from a different world. Here are the first two verses:

"Oxford Comma" begins with these lyrics:

Who gives a fuck about an oxford comma?
I've seen those English dramas too
They're cruel
So if there's any other way
To spell the word
It's fine with me, with me

Other song lyrics mention such things as Pueblo huts, Louis Vuitton, the Khyber Pass, Darjeeling tea and Peter Gabriel. There is nothing about vampires.

It's difficult to dislike Vampire Weekend. Their music is upbeat and listenable. Yet I wasn't truly hooked by their mixed-genre music or their quirky college-boy lyrics. Nonetheless, I'll admit it's a likable album.
Posted by Fantastic Reviews at 10:57 AM