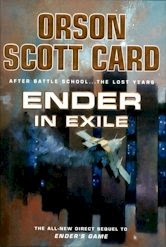 New on Fantastic Reviews is Aaron's review of Ender in Exile by Orson Scott Card.

From Aaron's Review of Ender in Exile :
"Ender in Exile is a good but not great book by a great, not just good, author. It is the latest entry in the saga of Ender Wiggin, a series that began in the mid-1980's with Ender's Game and Speaker for the Dead. Those two novels managed the unprecedented and still unduplicated feat of sweeping the Hugo and Nebula Awards in consecutive years, and together they form one of the major landmarks in the history of science fiction."

"Twenty years ago, on the strength of Ender's Game and Speaker for the Dead as well as the Alvin Maker series and outstanding short fiction such as "Unaccompanied Sonata" and "Lost Boys", Orson Scott Card was very widely regarded as one of the leading authors in the SF/F genre. Today his books still sell well but he does not garner the same sort of acclaim and awards, and a surprising number of critics and fellow authors are dismissive not only of his recent efforts, which even a devoted fan must admit are not as consistently powerful as his earlier work, but of his entire body of fiction."

"Sadly, I suspect much of this disdain is politically motivated....."

To read the entire review -> Ender in Exile

In addition, to sort out where Ender in Exile fits in the Ender series, we've set up this Ender Chronology diagram.
Posted by Fantastic Reviews at 11:28 PM